Oxygen Loss and Ecosystem Impacts in the California Current System 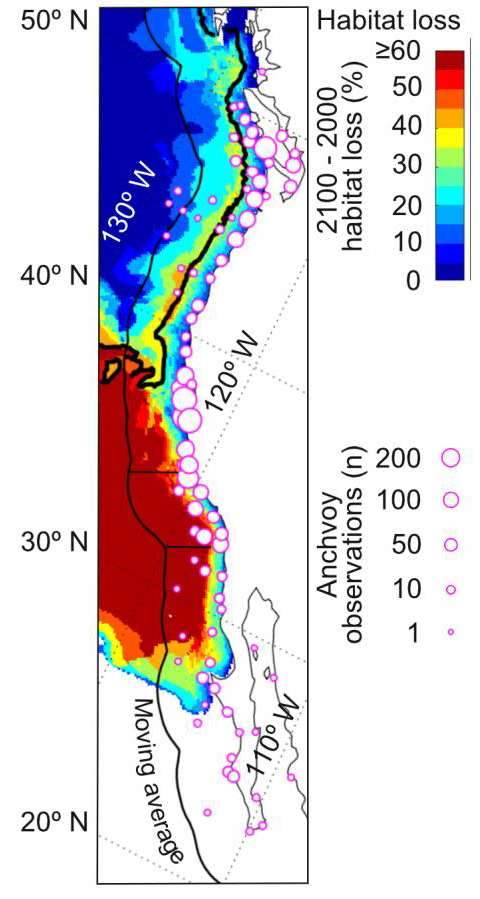 Global Earth System Models predict the North Pacific Ocean to be a region of substantial future oxygen loss. As ocean water heats up, its capacity to hold dissolved oxygen decreases. For organisms, as water gets warmer, they require more oxygen to survive. This means that in the future warmer ocean, many species such as the northern anchovy will have less habitat that can support their respiration needs.

NCCOS sponsored research, led by the University of Washington School of Oceanography and partners at UCLA and SCWRRP, analyzed past variability and future changes in how well various species in the CCS can meet their physiological oxygen and temperature requirements.

In the CCS, projected aerobic (oxygenated) habitat loss impacts will vary widely across different species. Some species will be able to survive in certain areas, whereas other species will not. This can disrupt ecological interactions throughout the region.

The study shows that the long-term distribution and abundance of northern anchovy are highly correlated with the volume of aerobic habitat available. Ocean warming and oxygen loss by 2100 in the CCS are projected to decrease habitat oxygen levels in many areas below the northern anchovy’s metabolic requirements, causing the anchovy to lose up to 50 percent of its current range, largely in the southern CCS.

Partnering to Advance Use of Nature-Based Solutions in Cold Regions