We are supporting research that will identify areas of the California Current that are susceptible to ocean acidification and low oxygen and how that susceptibility will change in future ocean conditions. Research findings will inform regional water quality and resource management.

Why We Care
The California Current System is one of the most biologically productive regions of the world ocean. Seasonal upwelling of deep, nutrient-rich water maintains high rates of biological productivity, but also brings low-oxygen and relatively acidic waters onto the shelf and up to the surface. These conditions of ocean hypoxia and acidification (OHA) can restrict the habitat of key species and affect the ecosystem through food web interactions. A suite of factors combine to influence OHA, including large-scale climate change and human inputs of nutrients from coastal sources. The relative importance of these drivers has not been evaluated, yet is critical to any strategy to manage coastal water quality and marine resources.

Benefits of Our Work
From model results, we can determine what marine habitats are most susceptible to OHA and how susceptibility will change over time. We can also evaluate how land-based sources of nutrients exacerbate the problem. The project goals align with those of the West Coast Governor’s Alliance and the California Ocean Protection Council, each of which participate in the West Coast Ocean Acidification and Hypoxia Science Panel. 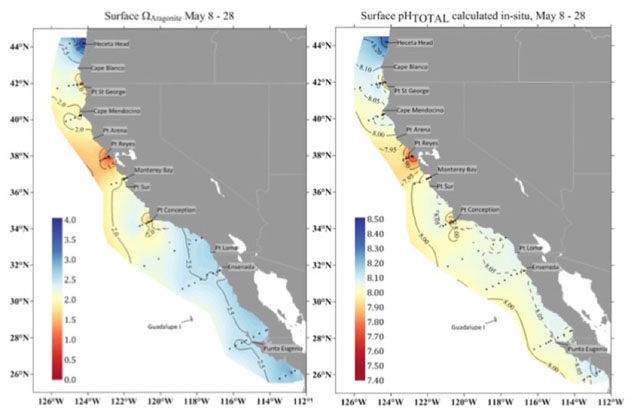 Preliminary maps of a) surface aragonite saturation; and b) surface pH measured along the west coast of North America from Baja California to Heceta Bank. Aragonite saturation values less than 1 (red colors) are corrosive to marine organisms such as oysters, clams, scallops, pteropods, crabs, and mussels, which may be experiencing significant stress due to the combined effects of warming, low oxygen and acidification. Credit: NOAA PMEL.