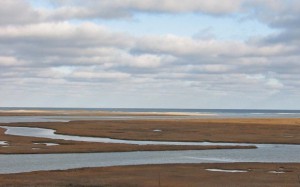 Recently a U. S. National Park Service (NPS) funded study benefited from the use of the NCCOS-developed 'underwater microscope' Imaging Flow Cytobot (IFCB) to identify harmful algal blooms in the Nauset Marsh at Cape Cod National Seashore, Massachusetts. NCCOS also supported development and deployments of the 'laboratory in a can' Environmental Sample Processor (ESP) in the Gulf of Maine containing an array of HAB toxin and cell sensors. Soon simultaneous deployments of the IFCB and the ESP will enable in-depth studies to investigate linkages between harmful algae bloom dynamics, toxin production, and shellfish toxicity in situ, and give early warnings of impending toxic events.

With both the IFCB and ESP now commercially available, regional observing systems, academic labs, and government agencies in the U. S. incorporate these instruments into their monitoring, research, and event response programs. 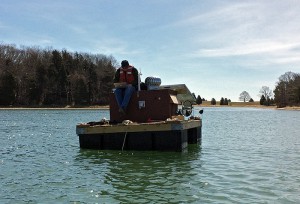 A raft in Nauset Marsh supports an IFCB to continuously record microscope images of phytoplankton, including the red tide dinoflagellate Alexandrium fundyense. The raft is equipped with power and a wireless Internet connection to run the IFCB. Credit Woods Hole Oceanographic Institution

Learn more about the Nauset Marsh HAB study, the IFCB, ESP, and the growing threat of HABs in a six and a half minute video from the Woods Hole Oceanographic Institution, ' Setting a Watchman for Harmful Algal Blooms.'