How Will Changing Temperature and Oxygen Conditions in the California Current System Influence Important Fish and Shellfish Species?

We are supporting the application of coastal ocean models to determine the vulnerability of important species to changing temperature and oxygen in the California Current. This will enable coastal managers to conduct vulnerability assessments for species and habitats, manage coastal pollution, and frame management decisions within realistic and informed projections of climate change. 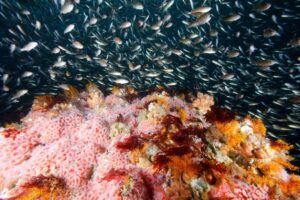 The California Current System (CCS) is one of the most productive regions of the world ocean, but low oxygen (hypoxia) conditions can limit the available habitat for many marine species. This region is predicted to undergo some of the most rapid rates of oxygen decline in the world’s oceans, raising the potential for major ecosystem disruptions. Management actions at regional and local levels can help to address the impacts of hypoxia by reducing other stressors such as nutrient and organic matter loading from land, direct habitat destruction, and fishing. However, these actions cannot be effective without an understanding of ecosystem vulnerability to multiple stressors, and the societal impacts of that vulnerability.

Two key management questions related to hypoxia have been identified by U.S. West Coast marine resource and water quality managers: (1) What groups of species and habitats are most vulnerable to hypoxia and co-occurring stressors (e.g., temperature, ocean acidification), and how will they impact ecosystem services? (2) Are land-based sources of pollutants exacerbating the problem of hypoxia? Knowing which species and habitats are most vulnerable to climate change stressors is also critical to identifying favorable (or unfavorable) locations for mariculture and marine protected areas.

We have funded a team of researchers led by the University of Washington to evaluate species responses to temperature and hypoxia changes using mathematical modeling. The work is driven by four key questions:

The species involved in the analyses may include Anchovy, Sardine, Market Squid, Spiny Lobster, Dungeness crab, Red Sea Urchin, California Halibut, Petrale sole, Pacific Dover Sole, Sea Hare, Pteropods, Rockfish, Spotted Ratfish and Octopus. The selection of final species to be examined will depend on the accessibility of data, as well as physiological traits of the species.

The NCCOS Coastal Hypoxia Research Program (CHRP) is providing funding for the project. 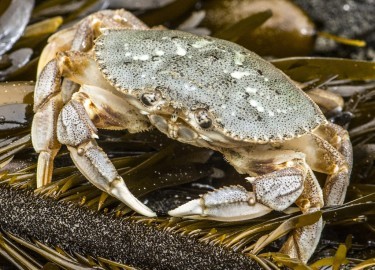 The output from these models can be used to assess current ocean condition, predict future conditions and assess biological vulnerability to hypoxia CCS-wide and in specific environments like the Southern California Bight. It can also be used to explore the effects of locally-sourced nutrient inputs on hypoxia conditions and resulting outcomes for important species.

Without more scientific certainty about how the present day and future patterns in these stressors will impact CCS species and habitat, managers lack the rationale (and public will) to change management approach or existing regulations. The Oregon Department of Fish and Wildlife, the California Ocean Protection Council, and the California State Water Resources Control Board see this project as an important opportunity for a needed dialogue on hypoxia-relevant policy and management action. The framework developed through this project will enable coastal managers to conduct vulnerability assessments, manage coastal pollution, and frame management decisions within realistic and informed projections of climate change.