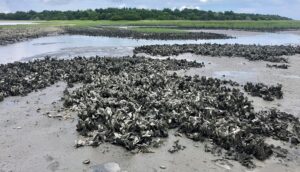 NCCOS has approved an Effects of Sea Level Rise Event Response (ESLR-ER) Award of $35,228 for a team that has developed less costly gauges for measuring the effectiveness of shoreline protection by oyster reefs. Key to oyster reef living shoreline success is achieving effective coastal protection and a self-sustaining population of oysters.

This project builds on prior work that provided some evidence of the importance of the relationship between reef structural attributes (height and width) and oyster habitat suitability. As a result, verification of these observations under storm conditions, which drive erosive events, is needed. This information is essential to inform appropriate design and wider implementation of living shorelines globally.

The team, led by scientists from the University of Melbourne, the Mississippi State University Coastal Research and Extension Center, and Mississippi-Alabama Sea Grant Consortium developed less costly gauges than traditional equipment ($160 each; Temple, et al. 2020). The team will use the funds from the award to increase the number of wave gauges available to allow sampling across more sites during the hurricane season. The team hopes to capture varying levels of wave energy and the subsequent impact of different habitats on wave conditions. The team also measures the characteristics of the site (e.g., elevation, distance from reef to shore) and the bathymetry offshore of the reef. At the beginning of the storm season a drone/RTK (real-time kinematic) positioning survey will interpret the wave transmission data.

The external (left) and internal (right) structure of the low-cost wave gauges utilized in this study. These are secured to an anchor and deployed in shallow water to measure wave climate before, during, and after storm events. Details (build instructions, supply lists, code, etc.) can be found at http://coastal.msstate.edu/waves. Credit MSU.

The team have identified 17 oyster reefs and their paired control sites, and are deploying wave sensors at the sites between July-November 2020. These sites include locations in New Jersey, Virginia, Florida, Alabama, Mississippi, and Louisiana. To cover so many sites, an extensive team of scientists from around the Gulf and the East Coast regions is needed. In addition to the aforementioned institutions, the Virginia Institute of Marine Science, Rutgers University, Northern Gulf Institute, University of Central Florida, U.S. Geological Survey, Louisiana State University, Nicholls State University, Partnership for the Delaware Estuary, University of Central Florida, and the University of South Alabama are all participating in the project. The team will also collaborate with the Nearshore Extreme Events Reconnaissance (NEER) association to share observations and leverage the networks additional observations during major events.

The NEER program shares some of the ESLR-ER Program goals; to conduct rapid, pre-storm site characterizations and instrument deployments by flexible interdisciplinary teams to collect perishable data that is needed to address key hypotheses about storm impacts on coastal areas. These include interactions and feedback between the natural and artificial environments, as well as human actions and reactions to the event. The primary difference of ESLR-ER is an interest in a larger range of acute events beyond that of just hurricanes and tropical storms.