In a study published recently in the Journal of Marine Science and Engineering, NCCOS and Northwest Fisheries Science Center researchers, along with partners at the University of Washington (UW), and the Monterey Bay Aquarium Research Institute, deployed the robotic Environmental Sample Processor (ESP) as part of an autonomous platform to provide near real-time surveillance of growth and toxicity of Pseudo-nitzschia in the Pacific Northwest (PNW). This study, which included use of an NCCOS-developed domoic acid (DA) toxin sensor on the ESP was aimed at developing observational capabilities that can improve our ability to predict how climate-driven changes may impact harmful algal blooms (HABs). 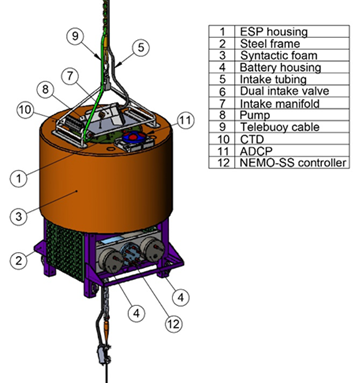 Although climate change is projected to alter many processes and properties in the ocean that give rise to HABs, we remain uncertain as to what the HAB response to climate-driven changes will be. Given that the mechanisms underlying this response are not well understood, one promising approach to addressing this challenge is through the use of rapidly emerging, uncrewed systems technology – one of NOAA’s primary science and technology focus areas.

Over a three year period (2016-2018), these researchers relied on the ESP to provide data on the abundance and toxicity of DA-producing Pseudo-nitzschia species that regularly cause closures of the important razor clam and Dungeness crab fisheries in the PNW due to contamination with this HAB toxin. Along with collocated sensor packages collecting environmental measurements and VIIRS ocean color satellite imagery, the ESP data indicated that high concentrations of Pseudo-nitzschia and elevated DA levels are not necessarily associated with the transport of water from known offshore bloom initiation sites, or ‘hot-spots’, such as the Juan de Fuca eddy.

This important and unexpected finding demonstrates that continued advancement of uncrewed systems such as the ESP, integrated with an autonomous observing platform, will be key to improving our knowledge of HAB dynamics in general and, more specifically, how they may respond to climate variability now and into the future.

The ESP was deployed ~24 km W/NW of La Push, WA as part of the long-term Northwest Enhanced Moored Observatory – Sub Surface (NEMO-SS), jointly operated by UW and the Northwest Association of Networked Ocean Observing Systems (NANOOS). This site is located in the transport pathway between a well-known HAB ‘hot-spot’ (i.e., the Juan de Fuca eddy) where Pseudo-nitzschia blooms often form, and coastal beaches along the WA coast where razor clams are harvested. The near real-time ESP data can provide early warning to State managers (e.g., WA Department of Fish & Wildlife) of toxic blooms originating at this ‘hot-spot’ and contributes to the PNW HAB Bulletin, now distributed by the NANOOS to managers and other stakeholders to inform decisions on harvesting closures. Moreover, the suite of additional environmental sensors associated with the NEMO mooring and another nearby (~400 m) heavily instrumented (oceanographic and meteorological sensors) mooring called Chá Bă, along with satellite-based ocean color imagery, helped to characterize the physics and chemistry of the system and, perhaps most crucial, provided context for interpreting the ESP results. 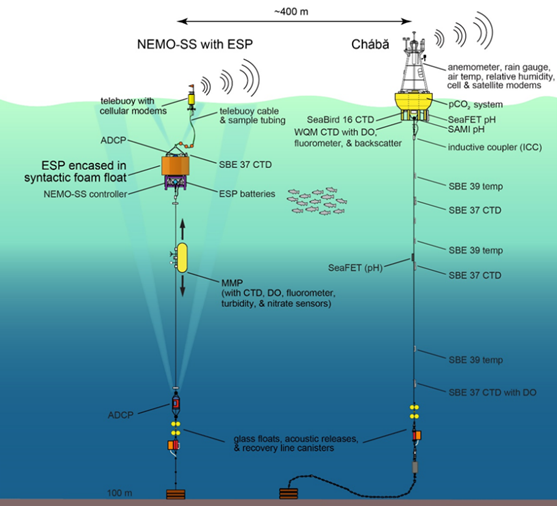 This particular study, supported by a NOAA US Integrated Ocean Observing System, Ocean Technology Transition Program project awarded to NANOOS, as well as Northwest Fisheries Science Center, NCCOS and Monterey Bay Aquarium Research Institute, demonstrates the value of uncrewed systems for carrying out NOAA’s mission under the Harmful Algal Bloom Hypoxia Research and Control Act, which calls for advancement of the scientific understanding and ability to detect, monitor, assess, and predict HAB events and recommends the use of uncrewed systems for this effort.

Visible and Infrared Scanner (VIIRS) daily, near-surface chlorophyll-a concentrations for (a) 11 Sept., (b) 21 Sept., (c) 1 Oct., and (d) 8 Oct. 2017 at approximately the same time each day. Gaps in coverage (white) are largely due to cloud cover and fog. The magenta star shows the location of the ESP mooring. The magenta line shows 2-day duration progressive vector tracks suggesting a potential past trajectory of water arriving at the mooring site. These results suggest that blooms of Pseudo-nitzschia that produce DA may form locally along the shelf throughout the spring-fall season, in addition to known hotspots such as Heceta Bank, Oregon and the Juan de Fuca eddy. Modified from Figure 10, Moore et al., 2021.