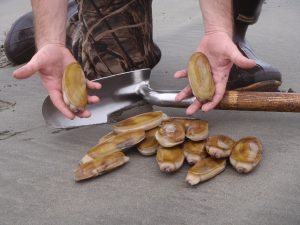 Razor clams are an economically important shellfish harvest off the coasts of Oregon and Washington. Closures due to Pseudo-nitzschia exposure in 2015 led to $22.7 million in losses. Credit: Washington Department of Fish and Wildlife.

NOAA's National Centers for Coastal Ocean Science (NCCOS) are funding development of a harmful algal bloom (HAB) forecast in the Pacific Northwest to support management of shellfisheries, clamming beaches, and human health. The experimental monitoring and forecasting system will launch in 2017, with forecast bulletins predicting bloom location and concentration several days in advance.

Annual outbreaks of the toxic algae Pseudo-nitzschia produce the neurotoxin domoic acid, which builds up in exposed shellfish and can cause amnesic shellfish poisoning (ASP) in humans. Commercial and recreational shellfisheries are therefore monitored for HAB toxins, and closed to prevent outbreaks of ASP. These closures can result in millions of dollars in lost harvests. For example, a massive West Coast -wide Pseudo-nitzschia bloom in 2015 saw closures to the valuable Dungeness crab, rock crab, and razor clam fisheries. The initial estimate for losses in tourism-related spending from Washington's lost razor clam harvest in 2015 is $22.7 million.

'We have the technology to monitor and forecast HABs, and are excited to engage stakeholders in developing a product that protects public health and safeguards our coastal economies,' said NCCOS Director, Mary Erickson. 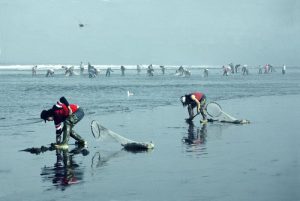 Members of the Quinault Indian Nation fishing in Washington. Treaty fishing rights allow coastal tribes to share in the harvest of shellfish along portions of the coast, and their commercial and subsistence fisheries closed at the same time and remain closed today. Not only is the loss of fishery income to tribal members significant, the loss of subsistence opportunities remains a major impact to these relatively remote villages. Credit: Washington Department of Fish and Wildlife.

NOAA's Northwest Fisheries Science Center ( NWFSC ) and members of the Makah Tribe will conduct near -real-time monitoring of offshore conditions, collecting and analyzing samples at two-week intervals beginning in the spring of 2017.

'This partnership with the new center of excellence at the Makah Tribe will bring the most powerful technologies for algae and toxin detection to our partners who are directly impacted by these blooms,' said NWFSC biologist Vera Trainer. 'This will help the Tribe and all coastal managers make rapid, informed decisions about seafood safety.'

Scientists with the University of Washington will generate the forecast with their LiveOcean model, integrated with information from other project partners, including beachside monitoring of toxin levels and real-time data from NOAA's "lab in a can," the Environmental Sample Processor (ESP). The ESP was deployed last May by the University of Washington, NOAA, and partners with funding by the U.S. Integrated Ocean Observing System (IOOS).

Ultimately, the team plans to produce a map-based assessment of domoic acid toxicity risk leading up to each scheduled razor clam dig, in the form of a Pacific Northwest HAB Bulletin for coastal resource managers. All of these components will come together to provide more reliable predictions of when and where these toxic blooms will be expected and ensure safe access to the region's seafood.

'This will be a sort of 'weather forecast' for Pacific Northwest HABs,' said Parker MacCready, a University of Washington professor of oceanography. The goal is for forecasts to be produced and disseminated as bulletins in partnership with NOAA's U.S. IOOS partner, the Northwest Association of Networked Ocean Observing Systems (NANOOS). 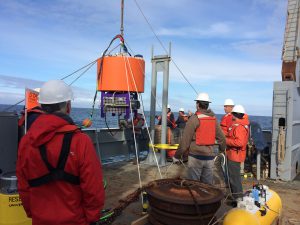 Scientists deploy the environmental sample processor (ESP) off the coast of Washington, to monitor the presence of Pseudo-nitzschia and their toxin, domoic acid. Credit: NOAA.

In addition to the University of Washington, project partners include NOAA's Northwest Fisheries Science Center, the University of Strathclyde, and the Oregon Department of Fish and Wildlife. This project is part of the NCCOS Monitoring and Event Response for Harmful Algal Blooms research program.

The Pacific Northwest HAB forecast system is part of a NOAA ecological forecasting initiative that aims to deliver accurate, relevant, timely, and reliable ecological forecasts directly to coastal resource managers and the public. NOAA is also providing or developing HAB forecasts for the Gulf of Maine, Texas, Florida, and Lake Erie, and hypoxia forecasts for the Gulf of Mexico and Chesapeake Bay.