Last week, NOAA and their partners deployed an NCCOS-developed sensor for the algal neurotoxin domoic acid on an Environmental Sample Processor (ESP) off the Washington coast. The processor, known as ESPfriday, is operated by the Northwest Fisheries Science Center (NWFSC). 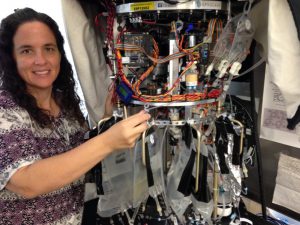 NWFSC and University of Washington researchers deployed ESPfriday about 15 miles off La Push, WA in the Olympic Coast National Marine Sanctuary for the first of two 2017 deployments at this location. This important site targets surveillance of the transport path for offshore Pseudo-nitzschia populations moving onto coastal beaches, where there is a potential threat of shellfish contamination.

The ESP is integrated with the Northeast Enhanced Moored Observatory mooring developed by the University of Washington Applied Physics Laboratory, which provides a stable platform and enables communication with ESPfriday during the deployment. This effort is part of a U.S. IOOS Ocean Technology Transition Project grant led by the University of Washington and NWFSC, and involving partners from NCCOS, MBARI, NANOOS, WHOI, and the Northwest Indian College.

In an effort to maximize visibility and management application of data generated by ESPfriday, observations of domoic acid and potential HAB-forming species will be incorporated as available into the Pacific Northwest HAB Bulletin. The bulletin is a forecasting effort supported through the NCCOS Monitoring and Event Response for Harmful Algal Blooms (MERHAB) Program and is transitioning to operational status as part of NOAA's Ecological Forecasting Roadmap initiative.