The productive coastal ocean off northern California, Oregon, and Washington is facing impacts from multiple environmental stressors, including hypoxia, harmful algal blooms, increasing water temperatures, and ocean acidification. This work will help managers and tribes prepare for the anticipated impacts of climate change by increasing their understanding of how these multiple stressors are likely to interact and affect Dungeness crab, and the communities dependent on them. 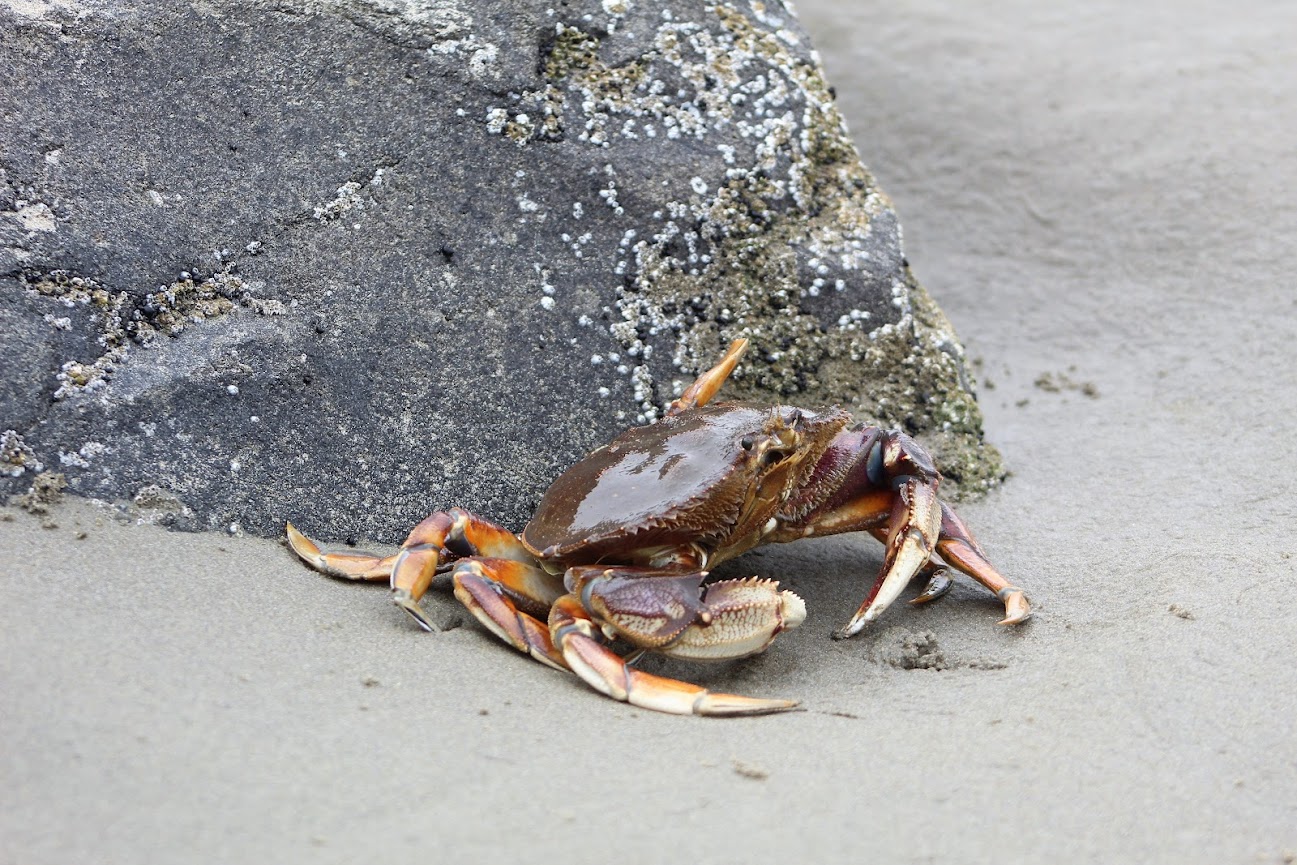 Dungeness crab is widely distributed along the U.S. west coast and represents one of its most important fisheries. Credit: Samantha Chisholm Hatfield

Why We Care
Along the U.S. west coast, managing impacts from multiple environmental stressors is an immediate rather than distant threat to marine ecosystems. Ocean acidification, hypoxia (or low oxygen waters), increasing water temperatures, and harmful algal blooms have emerged as leading environmental stressors, impacting ecosystems, fisheries, and Indigenous and other coastal communities. The intensification of these multi-stressors poses substantial challenges for the management of ocean resources, ecosystems, and protected species.

For the Dungeness crab fishery, the U.S. West Coast’s most valuable fishery, hypoxia has resulted in mass mortality of crabs in commercial pots, and harmful algal bloom events have led to substantial fishing curtailment including season-scale closures. Since Dungeness crab is an anchor fishery for many fishermen, the loss of and/or shifts in harvest opportunities can increase pressure on threatened and endangered salmon stocks. For NOAA’s Olympic Coast National Marine Sanctuary and Tribal treaty fishing areas that have fixed boundaries, uncertainties in the expression and impacts of ocean acidification, hypoxia, increasing temperatures, and harmful algal blooms threaten to undercut the ability of managers to safeguard marine resources.

What We Are Doing
We are working in partnership with coastal tribes in northern California, Oregon, and Washington, the commercial Dungeness Crab fishery, and relevant Federal and State agencies to help them be ready to deal with future climate change, by increasing their understanding of how multiple stressors (ocean acidification, hypoxia, harmful algal blooms, and increasing temperatures) are likely to impact Dungeness crabs and the communities dependent on them in the future. To do this, we are: (1) synthesizing extensive region-wide observations of ocean acidification, hypoxia, harmful algal blooms, and marine heat waves, (2) adapting ocean models to forecast stressor changes, and (3) conducting field and lab studies to determine biological sensitivity of Dungeness crabs (Metacarcinus magister) and krill (Euphausia pacifica). Together, these activities will inform (4) a formal management strategy evaluation to assess the performance of fishery management options to support a healthy crab fishery in the face of climate change. We will also incorporate Traditional Ecological Knowledge using ethnographic interviews to better understand past and future ocean changes, and their impacts on access to first foods.

To ensure that our project and its outputs are useful to tribal, industry, and agency managers, we will work closely with them to translate our results. The study will assess the effectiveness of existing management tools and provide recommendations to bolster the multi-stressor readiness in the Dungeness crab fishery.