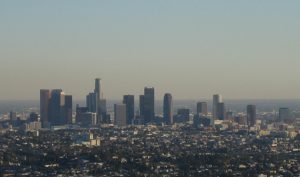 NCCOS-supported researchers simulated the effects of the human population on the waters off Southern California. The study found that the excess nutrients being discharged into the ocean resulted in significant increases in the production of phytoplankton biomass, which causes lowered oxygen (hypoxia) and pH (acidification) subsurface (Figure 1).

The Southern California Bight, an area of ocean located between the Baja Peninsula and Point Conception in Santa Barbara County, borders a population of 23 million people, including the Greater Los Angeles area, that discharges approximately 8 million cubic meters of nutrient-enriched stormwater and wastewater into the ocean each day. Considering that the U.S. West Coast is already experiencing increased hypoxia and acidification from climate change, the effect of local human nutrient inputs exacerbates this trend. This increase in acidic and hypoxic waters is likely compressing suitable habitat for marine organisms; with cascading effects on their populations, this trend worsens under future climate change scenarios.