Coastal sand dunes are dynamic features that are continuously evolving due to winds and waves. The relative importance of these complex coastal processes that determine if sand is added to or eroded from the dune are often poorly known. The National Centers for Coastal Ocean Science has sponsored research that has worked to collapse these complex, coupled processes into simple metrics to better understand the processes that create and destroy sand dunes. 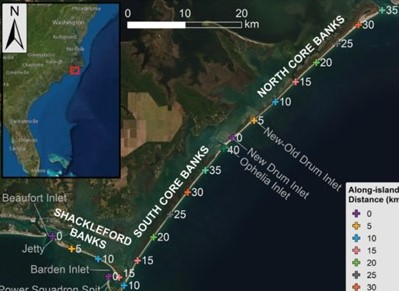 Results of this study document how beaches and foredunes at Cape Lookout National Seashore, North Carolina, have changed using airborne lidar and offer three metrics that represent the processes that either build or destroy sand dunes.

Sand dunes offer ecosystem services, including defense from surge and waves during storm events, habitat for wildlife, tourism, recreation, and carbon sequestration. Natural dunes are highly dynamic features that are constantly changing in response to erosion from storm events and recovery during calmer periods via wind- and wave-driven sediment transport. Coastal dune characteristics, such as height and width, are often quantified using airborne lidar, which can provide high resolution data for large spatial regions. However, lidar is often flown at intermittent periods, historically following large storm events such as hurricanes. Thus, the frequency at which it is collected may under-sample changes to the dune.

To better predict coastal dune change in the absence of lidar, it is necessary to better understand the relative contributions of constructive and destructive processes driving how the dune shape changes through time. Better estimates of dune changes can both improve coastal hazard forecasts and help coastal communities better prepare by predicting where dunes are at the greatest risk given these dynamic processes. This information can then be used to inform dune management decisions, like beach nourishment. 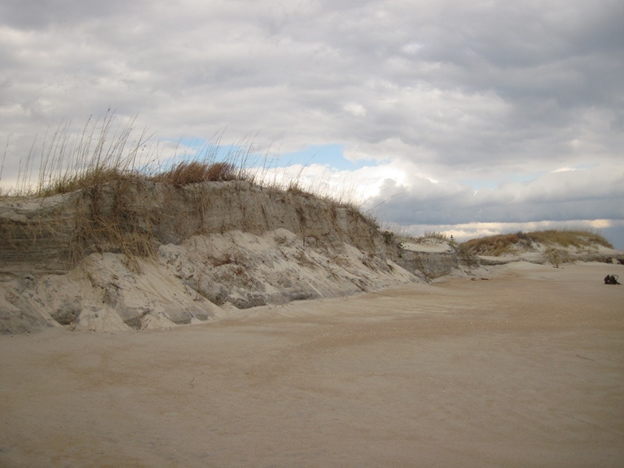 Study results show that the location of the dune base has generally retreated since 1997, while dune crest heights accreted by 0.01–0.02 m/year. The study developed three individual metrics that represent (1) the potential for erosion, i.e., total water level impact hours per year, (2) accretion, i.e., dune building hours per year, and (3) the relative net effect of foredune accretion and erosion processes, i.e., constructive–destructive dune forcing (CDDF) ratio, and test the correlative power of these metrics in explaining changes in foredune shape and size.

The total water level impact hours per year metric explained as much as 66% and 67% of the variance in dune crest and toe elevations, respectively, across the nearly two decades of dune evolution. The greatest number of dune building hours per year and largest dunes within the study site co-occurred at locations exposed to the dominant cross-shore wind direction as a result of varying shoreline orientation. The CDDF ratio was positively correlated to changes in the dune toe elevation in approximately 70% of dunes within the study site, outperforming the impact and dune building hours per year metrics.

The results show that these three metrics can provide useful estimates of dune morphometric change across multiple spatial and temporal scales, which may be particularly useful at sites where lidar acquisition is intermittent. These types of metrics can help identify dunes that will erode and require attention and those that are likely to build in size.

This study was funded in part through the NCCOS ESLR project “The Coastal Recovery from Storms Tool (CReST): Modeling Impacts of Sea Level Rise on Natural and Managed Beaches and Dunes.”