Coastal communities need to know what actions to take to mitigate flooding, now and in the future as sea level rises. A new NCCOS-funded study helps meet this need by quantifying flood risk across 13 coastal counties in Mississippi, Alabama, and the Florida panhandle.

Map of the study area along the Northern Gulf of Mexico coast. The yellow box is the inset shown in Figure 1. 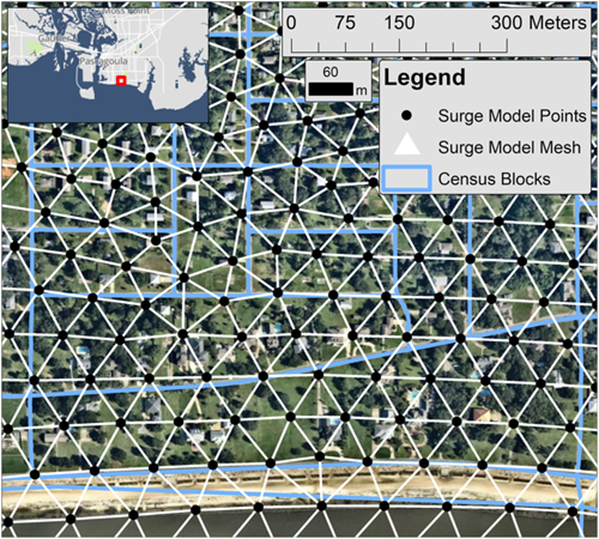 Figure 1. An example of the project’s storm surge model resolution, where data are predicted at each black dot, for census blocks in the Pascagoula area of Jackson County, Mississippi. Each census block (in blue) typically represents a few hundred residents. Census blocks are the smallest spatial unit by which the U.S. Census Bureau tabulates data.

Study results will help coastal managers and emergency planners better understand current and future flood risk, especially for locations outside the existing floodplain where flood insurance may be optional. The findings will also inform the type and scale of flood protection measures needed for an area that contains 3,000 miles of open coast shoreline, a dozen bays, major rivers, and extensive coastal infrastructure, including a large tourism industry.

The NCCOS Effects of Sea Level Rise (ESLR) Program provided funding for the study, which was led by scientists from Louisiana State University, the University of Georgia, and the Harte Research Institute at Texas A&M University–Corpus Christi.