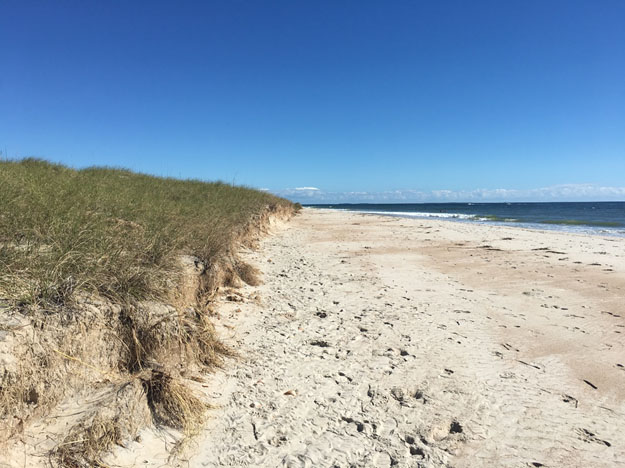 Beaches and sand dunes are critical to protecting coastal communities from storm surge, but the specifics of how different dune shapes, dimensions, and qualities influence their protective capabilities during storms are not fully understood. A recent NOAA-supported study suggests that greater protection from erosion and flooding is provided by a wide beach rather than the height or width of the dune. A wide, lower dune performed better during longer moderate storms while a tall, narrow dune provided more protection during intense storms, highlighting the importance of dune width in preventing erosion and height in preventing overtopping. Overtopping allows water to reach areas behind the dune, also known as overwash or inundation, potentially causing damage to the dune and homes.

Scientists at University of North Carolina-Chapel Hill and Oregon State University used XBeach, a model that simulates dune erosion during a storm. They used pre- and post-storm observations of actual storms to ensure accurate model results. This approach is very useful for evaluating beach and dune shapes under specific storms to inform beach and dune management options such as adding sand to the beach or dune, known as nourishment, or adding sand fencing, or planting beach grasses to influence where sand is captured.

The authors ran different “synthetic storm scenarios” based on conditions observed during 2016 Hurricane Matthew where the storm lasted for longer (i.e. increased storm duration) and the storm surge was higher or lower. Simulations found that, especially as storm surge increased, a sand fence placed on the sea-ward side of a natural dune traps sand to create a smaller dune. Although small, this sand fence dune delays waves from reaching the further-inland natural dune, as waves must first erode the sand fence dune. This reduces the overall exposure time of the natural dune to waves during a storm and increases the likelihood that it avoids overtopping.

A conceptual model of the processes that influence dune formation of a fenced seaward dune in front of an existing natural dune. Wind speed is reduced at the fence which promotes deposition of sediment around the fence location. Natural dune formation is more complex and is a function of the vegetation limit, driven by wave runup and saltwater. Adapted from Itzkin et al. 2020.

Increasing the width of beaches (i.e., nourishment) reduces dune erosion and prevents overwash by diffusing wave impact. Nourishment combined with sand fencing provides the most protection from overwash and inundation during a single storm. However these short term beach management actions need to be considered as part of a longer term adaptive management plan, as overtopping of dunes is part of the natural processes on a barrier island that allow it to avoid drowning under sea level rise. There will need to be careful consideration of the barrier islands’ competing needs in the North Carolina Outer Banks where this work is focused, as well as around the country and world. Overwash delivers sediment to the back barrier island allowing it to roll over and keep pace with rising sea levels, reducing the risk of drowning, however this process that would keep the barrier island above sea level would also destroy stationary infrastructure like houses and roads. This highlights the complexity of coastal processes and the importance of considering adaptation strategies within the context of long term adaptive planning.

This study was supported in part by the NCCOS Effects of Sea Level Rise (ESLR) project “The Coastal Recovery from Storms Tool (CReST): A Model for Assessing the Impact of Sea Level Rise on Natural and Managed Beaches and Dunes.” The project is led by Oregon State University, along the University of North Carolina at Chapel Hill.

Student-developed Sensor Used to Measure Impacts of Hypoxia on Oysters