Scientists deployed four underwater robotic Environmental Sample Processors (ESPs) in the Bay of Fundy and the eastern Gulf of Maine at the end of last month. The ESPs count the Paralytic Shellfish Poisoning (PSP)-causing dinoflagellates, Alexandrium fundyense (aka New England red tide). The sensors test a critical hypothesis that A. fundyense cells originate in the Bay of Fundy and travel down the coast, resulting in shellfish toxicity in the Eastern Gulf of Maine. This is the most challenging deployment to date because of the extreme tides and currents at several of the sites.

The coastal Gulf of Maine contains a large continental shelf region that supports extensive bivalve shellfish resources.  When shellfish consume A. fundyense, they can become toxic for human consumption. Rigorous state monitoring programs test for toxicity in shellfish and prohibit harvesting if levels become high enough to cause human illness. Closures, varying considerably each year, can significantly impact the economy by up to tens of millions of dollars in losses in some years. 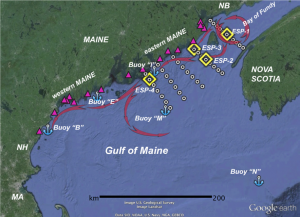 Blooms occur in three main regions of the Gulf (the eastern and western Gulf of Maine, and Georges Bank). Previous NCCOS-funded research led to annual and weekly forecasts of A. fundyense abundance in the western Gulf of Maine. The predictive model underlying that forecast is based on maps of seed-like cysts deposited on the bottom during the previous bloom season and oceanographic conditions during the current season.

The Eastern Gulf of Maine blooms remain poorly understood, despite their annual recurrence, and bloom predictions are not very accurate. “What we don’t know is the origin of A. fundyense cells that cause toxicity in eastern Maine,” said Dr. Don Anderson of the Woods Hole Oceanographic Institution (WHOI) and project leader. “It seems highly unlikely that a significant portion come from germinated cysts from the Eastern Gulf of Maine region, for two reasons. First, cyst concentrations are extremely low from the mouth of the Bay of Fundy to Penobscot Bay, and second, the Eastern Maine Coastal Current is cold, turbulent and well mixed, and thus is not favorable for A. fundyense growth. A more realistic explanation is that Eastern Gulf of Maine toxicity derives from A. fundyense cells that originate within the Bay of Fundy and are transported to shellfish in the estuaries and sounds of eastern Maine.”

“Three of the four ESPs are deployed around Grand Manan Island and one is downstream along the Maine Coast”, said Dr. Quay Dortch, NCCOS Program Coordinator for the Ecology and Oceanography of Harmful Algal Blooms (ECOHAB) Program, which is funding this project. “This is a critical test of the hypothesis that the Bay of Fundy supplies toxic A. fundyense cells to the Eastern Gulf of Maine. Since one of the ESPs is deployed in the Bay of Fundy, where currents are deep, turbulent, and fast, it is also a test to see if the ESPs can successfully operate under such difficult oceanographic conditions.” The downstream ESP is outfitted with an NCCOS-WHOI developed toxin sensor specific to PSP toxins and will provide data on bloom toxicity at that location. ESPs have been deployed in the Gulf of Maine at near shore locations since 2012 through a Monitoring and Event Response for Harmful Algal Blooms (MERHAB) project to test their use for providing early warning to managers. 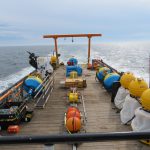 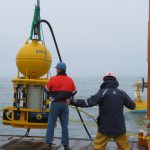 ESP3 raised off the deck of the Warren Jr for deployment. Credit: WHOI. 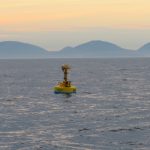 A fully deployed ESP4 with Acadia National Park in the background. Credit: WHOI.

This study addresses significant questions related to understanding the causes of HABs in the eastern Gulf of Maine and will enhance the predictive capability of NOAA models used for a planned operational HAB forecast in the Gulf of Maine.

Data from the ESPs are reported in real-time (if a map is not visible, try another browser) and available to the public online.

Small Bloom Predicted for Gulf of Maine Red Tide in 2017