A team of NOAA and academic researchers led by the Woods Hole Oceanographic Institution (WHOI) has issued a seasonal red tide forecast for the Gulf of Maine as part of a pilot program that expands NOAA harmful algal bloom (HAB) forecasting to this region. The forecast suggests a modest bloom for the upcoming 2014 season.

Forecasts of the extent and severity of blooms of the red tide alga, Alexandrium fundyense, depend on a map of the alga's cysts in Gulf of Maine sediments and on computer models that simulate a range of bloom scenarios based on previous years' ocean conditions. While this approach has proved accurate in most years, forecasts in 2010 and 2013 overestimated bloom intensity. 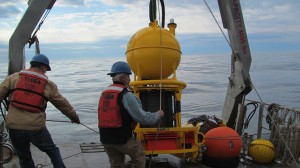 Deploying an ESP array in the Gulf of Maine from the R/V Tioga (credit: Bruce Keafer, WHOI)

This year the team will use nutrient, temperature, and salinity sensors, and a network of robotic HAB sensors called Environmental Sample Processors (ESPs) to help determine the oceanographic conditions that develop during the 2014 bloom season and to compare actual A. fundyense concentrations to those predicted by the forecast. ESPs also carry a sensor developed by NCCOS and WHOI that detects toxins associated with paralytic shellfish poisoning (PSP).

In addition to the seasonal forecast, the team is producing weekly updates based on models that include data on tides, wind, sea surface temperature, nutrients, solar radiation, and circulation. These weekly model results, along with regular measurements of actual A. fundyense cell abundance and PSP toxin concentrations from ESPs deployed at four locations in the Gulf of Maine, are distributed to more than 150 coastal resource and fisheries managers via the Northeast PSP website.