Small Bloom Predicted for Gulf of Maine Red Tide in 2017

This summer's red tide in the Gulf of Maine is predicted to be relatively small with limited impacts, as forecast by researchers at NOAA, Woods Hole Oceanographic Institution (WHOI), and North Carolina State University, continuing the pattern of smaller blooms seen over the last three years. 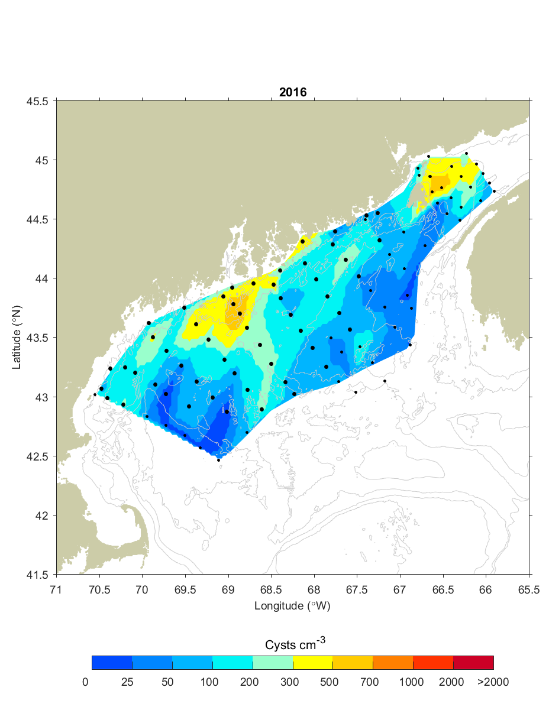 The magnitude and severity of Alexandrium blooms and the subsequent need for shellfish harvesting closures to protect human health vary considerably from year to year and between decades. Shellfish toxicity was severe and widespread from 1978 to 1988 and again from 2003 to 2009, but has been lower since then. The causes of the decadal variations are the subject of ongoing research.

Seasonal forecasts depend on measurements of numbers of seed-like cysts in bottom sediments inthe Gulf of Maine. Cyst abundances measured in late 2016 by NCCOS and partners at the Woods Hole Oceanographic Institution (WHOI) aboard the NOAA Ship Pisces were among the lowest recorded since surveys began in 2004. Low cyst abundance contributed to the forecasted small bloom this year. However, changing meteorological and oceanographic conditions can also affect the location of Alexandrium blooms and shellfish toxicity, making continued monitoring necessary.

Throughout the upcoming spring and summer, NOAA will issue weekly updates of modeled bloom extent, trajectory, and intensity to complement this seasonal forecast and guide states that will monitor Alexandrium cells and shellfish toxicity along the shore. During this period NOAA will also support deployment of robotic HAB sensors (Environmental Sample Processors or ESPs ) to measure the abundance of Alexandrium cells in the water at four offshore locations along the eastern Maine coast and in the Bay of Fundy. WHOI will make ESP data available online. Additional information will be posted throughout the season at the WHOI Northeast PSP webpage.

The 2017 forecast is the tenth seasonal Gulf of Maine red tide forecast. It is part of a larger effort to expand a national NOAA harmful algal bloom forecasting system to New England and advance the NOAA Ecological Forecasting Roadmap initiative.

The forecast was developed by researchers at Woods Hole Oceanographic Institution (WHOI) and North Carolina State University and is being transitioned to NOAA operations with funding from NOAA's National Centers for Coastal Ocean Science (NCCOS). Oceanographic data aiding forecasting is provided by the Northeastern Regional Association of Coastal Ocean Observing Systems. Sensor development and ESP deployments are supported by NCCOS, the National Science Foundation, and NOAA's Integrated Ocean Observing System.