According to NOAA and its partners from several Ohio universities,western Lake Erie will have a large bloom of cyanobacteria, a toxic blue-green algae, in late summer.The predicted bloom is expected to be smaller than last year's intense bloom and considerably less than the record-setting 2011 bloom.

Bloom impacts will vary across the lake's western basin, but tourism and fisheries are both likely to be negatively affected. Harmful algal blooms were common in western Lake Erie between the 1960s and 1980s. After a lapse of nearly 20 years, blooms have been steadily increasing over the past decade.

This marks the third time NOAA has issued an annual outlook for western Lake Erie. 'This annual forecast and NOAA's weekly bulletins provide the most advanced ecological information possible to Great Lakes businesses and resource managers so they can save time and money on the things they do that drive recreational activities and the economy,' said Holly Bamford, Ph.D., NOAA's assistant administrator for the National Ocean Service. 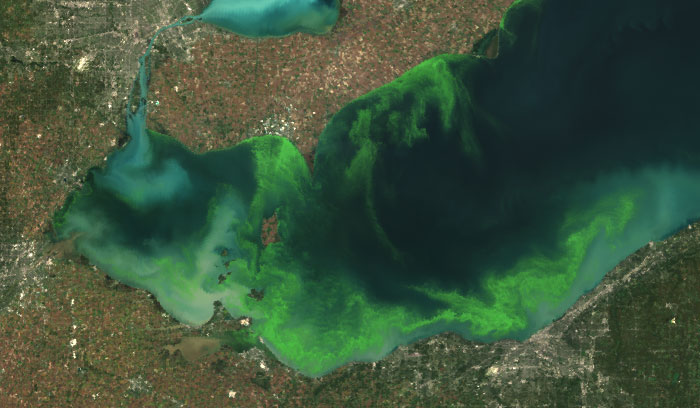 Satellite image of 2011 algal bloom in western Lake Erie (the most severe in decades). Credit: MERIS/NASA; processed by NOAA/NOS/NCCOS.

Second Field Season of Pollution and Ecosystem Characterization in the U.S. Virgin Islands Set to Begin