From 1998 to 2014, NCCOS supported the Hawaii Coral Reef Initiative (HCRI) to fund research on Hawaii’s coral reefs, including invasive algae and seaweed control measures. One outcome was the “Super Sucker” in partnership with State of Hawaii and the Nature Conservancy (TNC) to remove invasive algae from Hawaii coral reefs and lagoons; the Super Sucker was eventually deployed in Oahu’s Kaneohe Bay.

The Super Sucker barge (at left) in Kaneohe Bay. The green collection hose used to vacuum up invasive algae from the reefs below is visible on the water surface. Credit: State of Hawaii Division of Aquatic Resources.

Using a combination of native sea urchins to eat the seaweed, and the Super Sucker to vacuum up the algae with a hose, TNC reported that some populations of the invasive algae disappeared entirely from Kaneohe Bay by 2015. 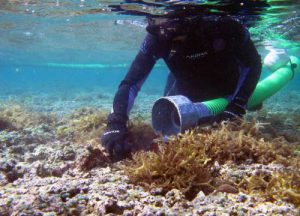 With the help of a vacuum hose attached to a barge —a device known as the “Super Sucker”—divers can now remove invasive algae from coral reefs in Kaneohe Bay in much less time. Credit: State of Hawaii Division of Aquatic Resources.

Scientists suggest that a combination of factors may have brought the invasive algae down to historic low levels—from warmer ocean temperatures and increased fresh water from rain storms to ongoing algae removal by the Super Sucker and the reintroduction of native sea urchins.

No matter the reason for the decline of invasive algae in Kaneohe Bay, the outcome is a happy one. The partnerships developed by NCCOS and HCRI, including the Super Sucker, continue to this day.