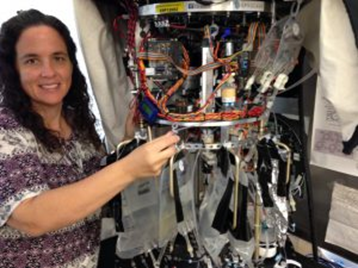 One of the two WHOI-owned ESP instruments, a standard format ESP, is installed adjacent to and acquires samples from the continuously flowing seawater system at the Bowdoin College Schiller Coastal Studies Center Marine Laboratory on Harpswell Sound, Maine. The DA sensor on this ESP has already detected particulate DA (pDA) at levels exceeding the alert level used in the Pacific NW for initiating shellfish toxicity testing and this information is being communicated to the state of Maine Department of Marine Resources Shellfish Monitoring Program via the Network. The other ESP, a recently developed ‘short-puck’ ESP with a 50 percent increased sample capacity, is deployed at the University of Rhode Island’s Graduate School of Oceanography (GSO) Narragansett Bay Campus pier. Levels of pDA at this location have thus far been below the lower limit of detection of the ESP’s DA sensor. 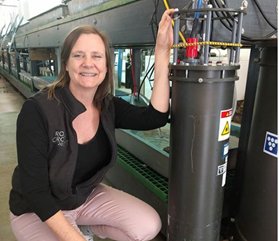 An Imaging FlowCytobot (IFCB) is co-deployed with each ESP (i.e., "Bowdoin" and "GSO") to monitor changes in cell concentrations of potential DA-producing Pseudo-nitzschia (PN) and other phytoplankton species, and to guide adaptive ESP sampling and toxin measurements. Using these instruments side-by-side provides a means to conserve and more strategically execute the finite number of analyses that can be run before needing to replenish the ESP’s onboard supplies, thereby extending the deployment duration over the bloom season. Moreover, DA production can be linked to the presence and abundance of certain PN taxa as detected and enumerated by the IFCB, which will inform models being developed to predict shellfish toxicity.

HABON-NE is focused on early detection of DA-producing blooms of the diatom PN that have become an increasing threat to New England shellfisheries during what was considered previously as the HAB ‘off-season’ (i.e., fall-winter; Sept-Feb). After processing and quality assessment/quality control evaluation by NCCOS researchers, DA data transmitted from the ESPs are being shared, as noted above, in near-real time with state managers through this newly-created observing network infrastructure, to support timely decision-making on shellfish harvest closures.

NCCOS has supported deployment of ESPs in New England coastal waters since 2012 to monitor cells and toxins of Alexandrium and Pseudo-nitzschia, and near real-time data on estimated Alexandrium cell abundance were made available for the first time to state and federal resource managers, researchers, other Gulf of Maine stakeholders in 2016. The 2020-2021 ESP/IFCB deployments mark the second deployment at Bowdoin College’s Marine Laboratory and first time use at the URI/GSO pier for detection and near-real time reporting of PN/domoic acid levels at these two locations.