Figure 1: Depiction of Environmental Sample Processor (ESP) and buoy configured for deployment in the Gulf of Maine. Credit: WHOI

During these deployments, near real-time data on estimated A. fundyense cell abundance were made available for the first time to state and federal resource managers, researchers, other Gulf of Maine stakeholders and the public via a new WHOI web server.

Two ESPs, named ESP-1 don and ESP-2 dennis, were deployed close to nearby Maine Department of Marine Resources (DMR) mussel monitoring sites and shellfish resources in western Maine coastal waters in Casco Bay and off Wells National Estuarine Research Reserve respectively. A third deployment (ESPjake) was located within a Bowdoin College wetlab on Harpswell Sound where mussels placed in an adjacent tray helped test relationships between the ESP results and shellfish toxicity. Further data from nearby NERACOOS buoys (Figure 2) help to understand how changing properties of water masses may affect the duration, scale, and toxicity of blooms (Figure 2). 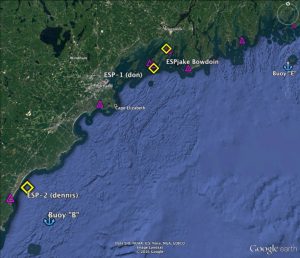 The ESPs employed an Alexandrium-specific probe to consistently detect the presence of A. fundyense in low concentrations early in the bloom season (Figure 3), consistent with the detection of low levels of shellfish toxicity reported during the same period by DMR. ESP-1 don, outfitted with an NCCOS-WHOI developed toxin sensor specific to Paralytic Shellfish Poisoning (PSP), successfully completed six autonomous toxin measurements from late May to early June - achieving a major ESP deployment milestone in this region (Figure 4). The low total PSP toxin levels corresponded to the low A. fundyense cell concentrations also reported by ESP-1 don. 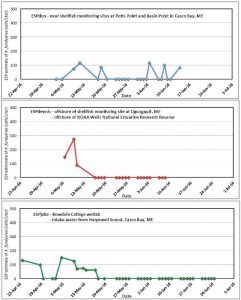 Figure 3. Time series of A. fundyense cell concentrations estimated from ESP-1 don, ESP-2 dennis, and ESPjake in the western Gulf of Maine during the 2016 field season. Credit: WHOI

Results suggest that the A. fundyense bloom never fully developed in the western Gulf of Maine in 2016. This conclusion was reinforced by generally low or no shellfish toxicity reported by shellfish monitoring agencies in Maine, New Hampshire, Massachusetts, and Rhode Island over the same period. The lack of a significant bloom detected either by the ESP array or by state monitors pointed to the accuracy of the 2016 Gulf of Maine Seasonal Red Tide forecast issued in April 2016.

In addition to detecting A. fundyense, and PSP toxin, ESPs deployed in the Gulf of Maine through early June 2016 were testing a capability for detecting another harmful alga, Pseudo-nitzschia. ESPs deployed with a modified HAB array that included nine probes targeting Pseudo-nitzschia species or groups of species known in the Gulf of Maine. Most of these species are either non-toxic or produce very low levels of the toxin known as domoic acid in culture. Positive signals for four (MUD2, HAS2, FRAUD, and PUNGENS) of the nine Pseudo-nitzschia probes were observed indicating the array was functioning properly. Pseudo-nitzschia was detected only by the two northern ESPs (ESP-1 don and ESPjake), and persisted at the inshore ESPjake deployment for about a month (Figure 2). At both sites, an increase in community diversity was observed in mid-May. Analysis of data from ship-based surveys timed to coincide with the 2016 ESP deployments will help verify findings and inform future enhancements of ESP cell and toxin probes. 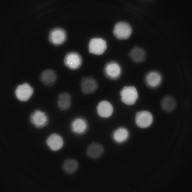 Since 2012, repeated deployments of multiple ESPs in the Gulf of Maine have proven the capabilities of this technology for routine use in high-energy, offshore, autonomous ocean observing applications to meet a variety of federal, state, and industry needs. The NOAA-WHOI partnership has pioneered use of an array of ESPs that integrate timely data on HAB species and toxins to enhance efforts to monitor and manage the growing health and economic threats posed by marine algal biotoxins in the region. NOAA and partners have demonstrated how ESPs can contribute to both HAB early warning toand to the development of accurate HAB forecasts -NOAA and stakeholder priorities for the Gulf of Maine.