We are collecting data to understand the impacts of shellfish-killing algae and their toxins on aquaculture farms and wild populations and to develop a warning system for growers and managers when these blooms reach levels harmful to these commercially and ecologically important organisms. This effort will enhance existing Puget Sound (SoundToxins) and coastal (ORHAB) monitoring and alert networks. 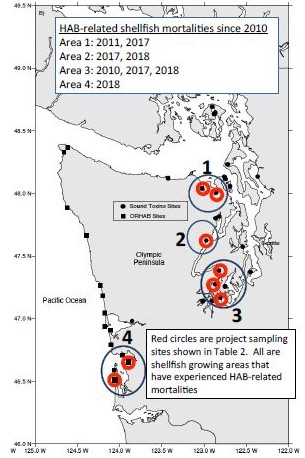 Why We Care
Washington is the largest producer of farmed shellfish in the United States, supporting more than 3,200 jobs and an estimated annual economic contribution of $270 million. A broad-based network of state and federal agencies, tribes, growers, scientists, and volunteers successfully monitors public health threats from harmful algal blooms (HABs). However, in recent years unattributed cases of juvenile and adult shellfish mortalities in Puget Sound and the Washington coast appear to be increasing; both shellfish farms and natural populations are suffering losses due to HABs that are not traditionally monitored and have toxic effects that are poorly understood. These include the dinoflagellates Protoceratium reticulatum and Akashiwo sanguinea. The long-term economic viability of the shellfish aquaculture industry depends on management strategies that understand how the cell density of shellfish-killing HABs, the quantity of their toxins (e.g., yessotoxins, YTX), and shellfish mortality are related.

The project team will also work closely with state, tribal, and aquaculture industry partners to pilot an effective and sustainable program for shellfish-killing HABs in Washington. The team will build on the successful SoundToxins program by developing new, near–real-time maps for shellfish-killing HAB species using thresholds identified in feeding trials for other algal species that pose a threat to human health. To sustain the shellfish-killing HAB pilot program the team will explore adopting a state-funded approach like that used by the Olympic Region Harmful Algal Blooms (ORHAB) Partnership. The team will also lead multiple training and educational sessions for shellfish growers, community monitoring groups and students, often coinciding with project investigator meetings, to help raise awareness of current and emerging HAB threats and to increase knowledge of aquaculture producers to these emerging threats to their farms.

Beyond Washington, the team will share findings and new approaches with all of the West Coast HAB monitoring groups via routine interactions and through presentations at both shellfish and HAB scientific meetings. The work will also bolster efforts to identify and mitigate the impacts of shellfish- and fish-killing HAB species on aquaculture in other U.S. regions.

Specific scientific objectives of the study are to:

The project is supported by the NCCOS Monitoring and Event Response for Harmful Algal Blooms (MERHAB) Research Program.

Benefits of this Work
Addressing a top aquaculture industry concern, this project identifies and characterizes shellfish-killing HABs, focusing on key aquaculture sites where historical shellfish illness and mortality have been observed. The goal of this project is to develop and optimize a monitoring and threshold-based HAB alert program for shellfish-killing harmful algae and their toxins in the state of Washington that will be transitioned to existing state-funded HAB monitoring and alert networks such as SoundToxins.

The project also fills an important need for shellfish growers who have experienced unexpected losses and who also have begun selling their product to the European Union (EU) where shellfish-killing toxins like YTX are regulated. This project will ensure that shellfish are safe for human consumption and that harvest and export potential are maximized.