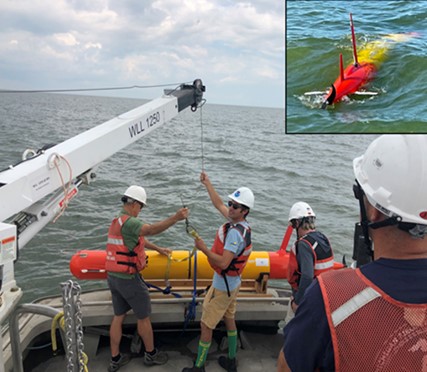 Why We Care
The occurrence and distribution of toxic phytoplankton blooms has been increasing worldwide over the past several decades. In freshwater and coastal ecosystems, the rise of toxic cyanobacterial harmful algal blooms (HABs) has caused negative economic impacts, adversely affected ecosystem and human health, and impacted drinking water supplies. In certain regions of the Great Lakes ecosystem, for example, cyanobacterial HABs have been a recurrent summer feature since the mid-1990s. While traditionally viewed as a freshwater issue, cyanobacterial HABs have been expanding rapidly across the freshwater–marine continuum and are now viewed as an emerging threat to coastal estuaries and ecosystems.

Most cyanobacterial HABs occur in coastal and shallow-water habitats, where waters are warm, nutrient rich, and can experience reduced turbulence. Traditionally, these systems have been monitored through ship-based sample collection, which represents a discrete, specific spatial and temporal event (i.e., samples represent conditions at a single time and location). However, phytoplankton blooms are complex. Growth and toxicity are not driven by a single factor. Multiple direct and indirect environmental conditions promote bloom development, often quickly. The complex interactions between biological, chemical, and physical variables that lead to cyanobacterial HABs within coastal and shallow-water systems can shift on short time scales, leading to drastic fluctuations in bloom biomass and toxin concentrations.

As such, monitoring cyanobacterial HABs in nearshore environments close to human activities is challenging for a number of reasons, including shallow-water depths, limited access to sampling locations, difficult environmental conditions, and the expanse of affected coastline.

What We Are Doing
The goal of this project is to provide near–real time, in-situ detection of cyanotoxins via the integration of a 3G ESP with an autonomous surface vehicle capable of sampling at multiple depths throughout the water column, particularly the first five meters. The suite of available commercial ASV platforms is large and continues to expand at a rapid pace, including “uncrewed” surface vehicles such as sail drones, wave riders, and solar-powered propeller-driven platforms. 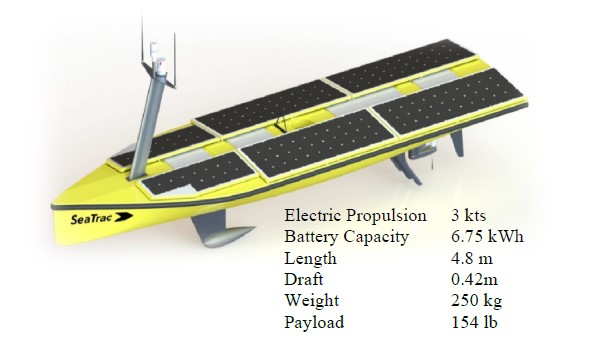 Example of a candidate ASV platform for the 3G ESP. The solar-powered SeaTrac ASV would be well-suited to handle the 3G ESP payload during the time of year when cyanobacterial HABs occur. Vessel speed and draft is adequate for HAB mapping and toxin detection over the western basin of Lake Erie and in Lake Pontchartrain. Credit: SeaTrac, Inc. and NOAA GLERL.

Monterey Bay Aquarium Research Institute’s (MBARI) recent development and field-testing of a long-range autonomous underwater vehicle (LRAUV) equipped with a 3G ESP for locating and sampling HABs begins to address cyanobacterial HAB monitoring, sampling, and analytical issues in shallow environments. Through a collaboration involving MBARI, the NOAA Great Lakes Environmental Research Laboratory (GLERL), the NOAA Atlantic Oceanographic and Meteorological Laboratory (AOML), and NCCOS, the 3G ESP/LRAUV has demonstrated the ability to autonomously perform in-situ sample acquisition, processing, and analysis for microcystin in near–real time and sample preservation for post-deployment ‘omics analysis — all accomplished while underway in Lake Erie. However, the scope of these missions was limited by depth, battery power, and a need to remain submerged for safety reasons.

To accomplish the goal of incorporating a 3G ESP into an ASV, the project has three objectives: (1) compare maneuverability, agility, and capabilities of the ASV to the LRAUV; (2) improve workflow and refinement of the embedded surface plasmon resonance (SPR) analytical chemistry assays, which will focus on robust and reliable microcystin detection; (3) further integration of the 3G ESP into the ASV; and (4) evaluate performance of the 3G ESP/ASV in the field across multiple spatial and temporal scales (Year 2: western Lake Erie; Year 3: Lake Pontchartrain Basin, Louisiana).

Benefits of this Work
There is increasing recognition within NOAA that deployment of uncrewed systems can enable the agency to meet selected mission requirements more efficiently and effectively. The ASVs being tested in this project can further advance NOAA’s ability to acquire, process, and analyze samples in-situ and in near–real time.

Combining state-of-the-art ASV technology with the 3G ESP will provide NOAA with scalable, automated biological observing capabilities of unprecedented spatio-temporal resolution, particularly in shallow, coastal systems. The development of a system that can access these shallow nearshore environments and transmit HAB toxin concentration data to shore-based operators in near–real time, as well as facilitate dissemination of this information to resource managers, will support timely decision-making and bloom forecasting to protecting public health and mitigate the socioeconomic impacts of HABs.

This project is supported by the NCCOS Prevention, Control, and Mitigation of HABs (PCMHAB).