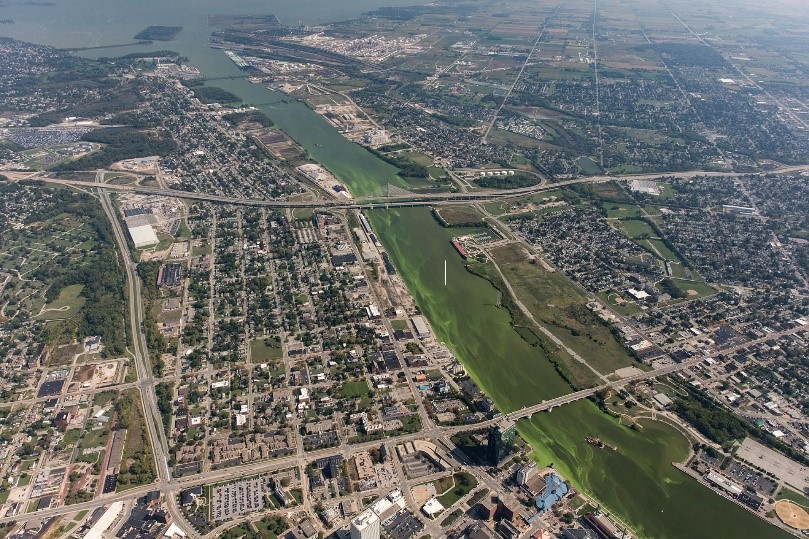 Aerial view of the 2017 cyanobacteria bloom at the mouth of the Maumee River, Toledo, Ohio. Credit: NOAA.

On September 20, 2017, an unprecedented cyanobacteria bloom was reported in the Maumee River estuary within the Toledo, Ohio, metropolitan area. The event triggered a health department recreational water advisory. Scientists supported by the NCCOS Event Response Program investigated the bloom, identified the causes, and recently published the findings.

Blooms of toxic cyanobacteria, including Microcystis, rarely occur within the Maumee River. However, nutrient (nitrogen and phosphorus) inputs from the river fuel seasonal cyanobacteria blooms in western Lake Erie. Additionally, the river serves as source water for multiple public water systems and a large food services facility in northwest Ohio. 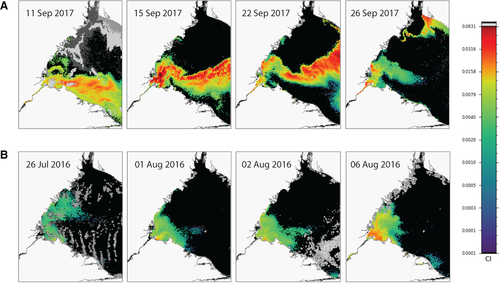 Time series of daily satellite images showing the changing spatial structure of cyanobacterial blooms visualized by the cyanobacterial index (CI) in the lower Maumee River and the western basin of Lake Erie during extended high‐retention periods in (A ) 2017 and (B ) 2016. Color scale is on the right with CI values on the left side of the bar. Credit: Matson et al.,2020.

Concentrations of the toxin microcystin exceeded recreational contact limits at sites within the lower 12 miles of the river, and genetic sequencing determined that Microcystis was the dominant species. Further analysis of the data identified probable physical causes of the 2017 bloom in the river and estuary, which include advection within Lake Erie increasing blooms in the Maumee River and water retention within the estuary due to low river discharge.

The study highlights the need to broaden the understanding of the physical drivers that influence cyanobacterial bloom development within freshwater estuaries, the interface between river and lake ecosystems. This is particularly important in places where these estuaries fall within large metropolitan areas, such as Toledo, Ohio.

Using long‐term physical data sets can assist in determining the likelihood of synergistic factors that may enhance cyanobacterial blooms in freshwater estuaries, improving the ability to forecast events in these habitats.