NCCOS-supported scientists evaluated potential economic impacts to the fisheries sector from expansion of the Pulley Ridge Habitat Area of Particular Concern (HAPC), located roughly 150 miles off Florida's southwest coast, and found that impacts would be limited to less than three percent in income, taxes, and employment. 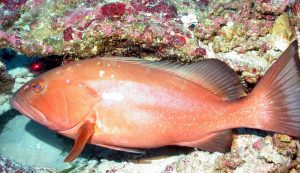 Red grouper, Epinephelus morio, is a target species for commercial fishermen in the Gulf of Mexico. Pulley Ridge is dominated by red grouper pits, excavations made by a red grouper that serve as their home territory and habitat for several fish species. Credit: Don DeMari.

In a primary survey of commercial fishermen, some did express concerns about the possible economic impacts of the above policy decision. However, the long-term impacts of the closure are expected to enhance fish abundance and productivity, while protecting the new high coral cover area discovered outside the HAPC in 2014.

The overall project, led by the University of Miami, investigated the role that the mesophotic reefs of Pulley Ridge (60–105 meters or ~195–345 feet) may play in replenishing key reef species in the downstream reefs of the Florida Keys National Marine Sanctuary and Tortugas Ecological Reserve.