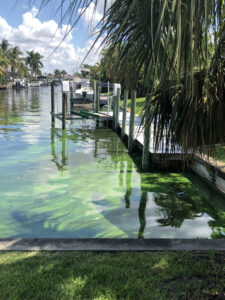 Background
In November 2018, NCCOS provided an Event Response award of $5,000 to FGCU to aid efforts to identify whether cyanobacterial (blue-green algae) blooms of Microcystis active around Cape Coral, Florida, are producing airborne toxins or particles. The goal of the program was to determine whether toxin and cell particles are present and to identify particle sizes (smaller particles can be more deeply inhaled into the lungs).

For several months in 2018, intensive Microcystis blooms plagued communities along the tidal Caloosahatchee River and adjoining canals around Cape Coral, Florida. The Florida Department of Environmental Protection (FLDEP) had been conducting conducted monthly sampling in the area and reported on the presence of Microcystis aeruginosa and microcystin toxin concentrations in the water. On September 17, 2018, FLDEP measured microcystin concentrations of 46 μg L-1 (micrograms per liter). According to the World Health Organization, microcystin concentrations greater than 20 μg L-1 in recreational waters are considered “high risk” for acute health effects.

With microcystins present in coastal waters near Cape Coral communities, residents expressed concerns about health risks from exposure to microcystins via inhalation of aerosols or particles (i.e., “algal dust”). However, there had been no conclusive scientific evidence supporting an airborne vector for microcystin exposure.

To start to address this question, the research team developed a pilot air sampling program, and in September 2018 began collecting air filter samples from two sites. The first was on a residential property on a dead-end canal along the tidal Caloosahatchee River next to a waning but ongoing Microcystis bloom, The second, a control site at the FGCU Vester Field Station was 25 miles upwind from the first location and where there was no bloom. Air samplers were run for 20 days, from September 21 to October 11, 2018 and water samples were also collected, before and after deployments at each site.

The team completed a third air sampler deployment from December 21, 2018 to January 18, 2019 at the FGCU-Buckingham Complex in eastern Lee County. This location is at least one mile from any retention ponds  and three miles from the Caloosahatchee River, and was selected to determine if it was possible to have a “non-detect” or zero measure of airborne cyanotoxins. Dr. Michael Parsons, FGCU project lead, hoped to be able to establish a “zero baseline” from this control deployment. Instead, sampling results showed low but measurable cyanotoxin levels. This may indicate the potential for airborne cyanotoxins to travel more than a mile inland or provide evidence for naturally occuring background levels of toxins in the air. 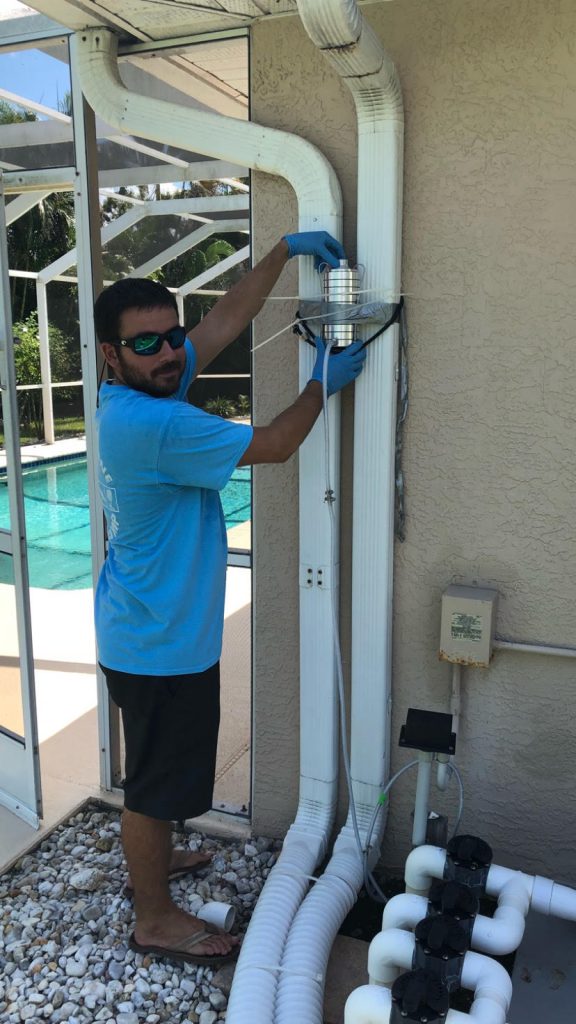 Results from the first two FGCU samplers detected microcystins at very low levels, at both the Caloosahatchee River and Vester Field Station sites, and in all particle size fractions measured by the air samplers, even those that represent particles small enough to reach human lung alveoli. These findings suggest the air samplers were measuring background levels in the local environment. FGCU shared results with personnel from Cape Coral, Lee County, and FLDEP in November.

In January, FGCU researchers also noted a compound produced by cyanobacteria, beta-Methylamino-L-alanine (BMAA) was also present in their air samples. BMAA has been suggested as a cause of some degenerative neurological diseases but studies to date are inconclusive or not in agreement. Further study may be warranted.

FGCU continues to explore ways to expand their pilot cyanotoxin air sampling program and are looking for opportunities to collaborate with other research groups active in Florida (e.g., Harbor Branch Oceanographic Institute) to enable a full exploration of the human health effects of airborne cyanotoxins. Results are being shared with personnel from Cape Coral, Lee County, FLDEP, and the public.

Eat them before they eat everything - Eatocracy - CNN.com Blogs