Past, Present, and Future High Tide Flooding in Charleston, SC

To aid in coastal planning, an NCCOS-sponsored study has developed a forecast of high tide flooding for the City of Charleston, South Carolina's historic peninsula section. In 1950, Charleston experienced flooding events roughly 2 days out of the year (total of 4 hours). By 2014, these flooding events increased to 25 days out of the year (total of 42 hours). This study extrapolated these observations, predicting the city will experience 60 flood event days a year, for a total of 103 hours of flooding, by 2051. The flooding is expected to most impact areas already experiencing flood events. 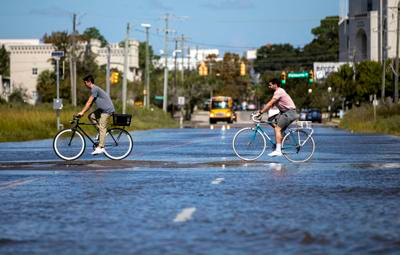 Bicyclists ride through high tide flooding at the intersection of Hagood Avenue and Line Street on Sept. 21, 2020, in Charleston, SC. Credit Andrew J. Whitaker/Staff, The Post and Courier.

Charleston is the largest city in the state of South Carolina and one of the most popular tourist destinations in the United States. Population growth in the region is among the highest in the U.S. The Charleston peninsula is surrounded by water on three sides and is subject to flooding from the Atlantic Ocean as well as inland flooding from rivers and associated tributaries. The area is also subject to storm surge, flooding from heavy rains and high tides (e.g., king tides).

The study adds to a growing body of evidence that accelerating sea level rise is going to exponentially increase the number of flood days for Charleston, corroborating evidence published by NOAA scientists in 2014 (see graph). The study’s model forecast is based on past trends in local sea level and tidal harmonics. The research team constructed statistical models to predict 1) future mean monthly sea level, 2) the number of annual flood events, and 3) flood duration and spatial extent on the peninsula. 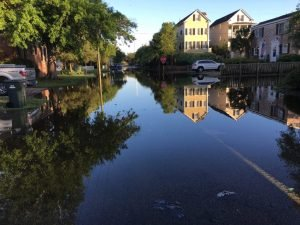 The study is part of the project Dynamic Sea Level Rise Assessments of the Ability of Natural and Nature-based Features to Mitigate Surge and Nuisance Flooding, supported by the NCCOS Effects of Sea level Rise Program (ESLR).

Shellfish Larvae Struggle in Fluctuating Oxygen and Acidity in Estuaries