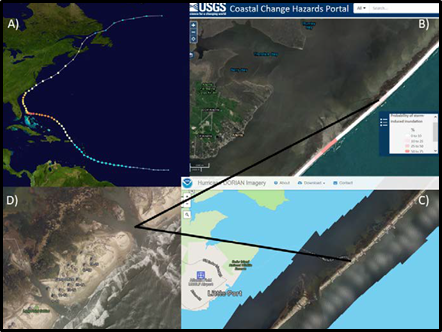 Figure 1. A) Track of Hurricane Dorian, which made landfall just north of Cape Lookout National Seashore on September 6, 2019. B) USGS projections of the probability of overwash due to Hurricane Dorian made prior to landfall. C) NOAA aerial imagery indicating the impact of Dorian along North Core Banks, which resulted in over 50 cuts through the barrier, and D) close up of Cape Lookout National Seashore damage at Long Point Cabins area on North Core Banks. Credit: P. Ruggiero, Oregon State University.

Dunes help protect coastal communities from storms, but they can also be severely damaged during these events through breaching and erosion. A new model developed by Oregon State University, the University of North Carolina Chapel Hill, and their partners predicts how long the dunes will take to recover. The collection of post-storm surveys allows the team to conduct additional testing of the model’s ability to grow and recover dunes following catastrophic events such as Dorian. Information regarding the natural rates of recovery can help coastal managers as they grapple with designing appropriate beach and dune restoration projects.

The Ecological Effects of Sea Level Rise Event Response Program, the new NCCOS program supporting the effort, aims to address a major gap in understanding how natural habitats could be used as an alternative to traditional engineering during and after storm events. The program provides immediate assistance for data gathering before, during, and immediately after storms, which are often difficult to anticipate as part of a scientific study.