A NOAA funded study published in the IEEE Journal of Selected Topics in Applied Earth Observations and Remote Sensing indicates that models that predict future coastal marsh conditions under sea level rise must have more accurate marsh elevation data than was once thought to make reliable predictions. 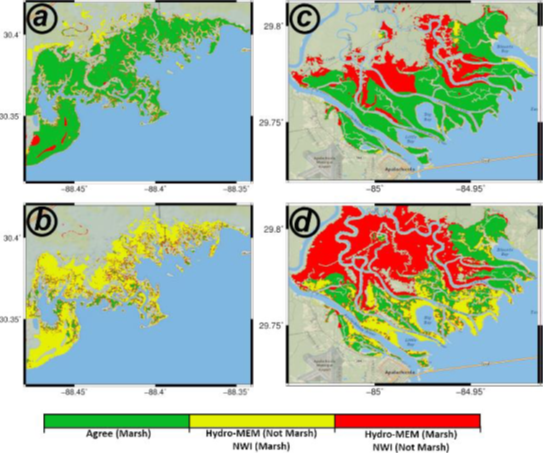 Comparison of the Hydro-MEM model results with National Wetland Inventory data using RTK-adjusted (top figures) and lidar-derived DEM (bottom figures) in Grand Bay (a,b) and Apalachicola (c,d).The maps are classified in green (model and data both shows marsh), yellow (data indicates as marsh but model did not produced marsh), and red (the model calculation demonstrate marsh but the data disagree). This qualitative assessment indicates the value of RTK-based adjustments in these microtidal systems. From Alizad et al. 2020.

The study finds that on site measurements using satellite based positioning (RTK) are required to make accurate predictions of marsh habitat type, rather than aerial measurements (lidar) alone. This is especially the case when the tidal range (elevation between high and low tide) is less than 2 meters (13 ft), as found for marshes in the Gulf of Mexico, known as microtidal (<2 meters) though was less important for a site in Massachusetts that was  mesotidal (2-4 meters).

The effort to gather the Lidar-derived and RTK-adjusted topography datasets are very different. Lidar derived digital elevation models (DEM’s), which relies on flying near infrared lasers at an elevation of 1000-3000 m allows for the collection of marsh surface elevation over large regions relatively quickly. RTK-adjusted elevations are an added layer and involves adjusting the lidar data through collecting elevation with a particular GPS every 20 meters across a grid for the entire marsh region. It is known that lidar data without adjustment does not provide as reliable a surface elevation in marshes because of multiple factors such as the inability of the lasers to penetrate through dense and often irregular vegetation, as well as different surface types absorb the laser differently. However, as anyone who has tried to walk through a marsh can tell you, including the project investigators, flying over a marsh is much easier than walking through one, which is why lidar alone has been utilized in the past.

The new article demonstrates that marsh model outputs, i.e., Hydro-MEM, based on unadjusted lidar derived surface elevations alone do a poor job predicting marsh habitat at microtidal sites when compared to the National Wetlands Inventory, while the model output using the RTK-adjusted topography had much higher agreement. This was not the case for Plum Island, MA, where the tidal range is greater, apparently masking the lower accuracy of lidar.

This is in agreement with other recent publications, most notably to another NOAA funded project in San Francisco Bay, CA.  This continues to add credence to the notion that visiting the marsh sites and collecting RTK data is needed in microtidal habitats. It also stands as a reminder that data collection and modeling methods may not have uniform effectiveness across all marsh types and regions with different physical and ecological characteristics.

The research described in the paper has been supported by two NCCOS Ecological Effects of Sea Level Rise projects.