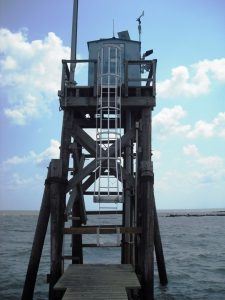 The dynamic models (hydrodynamic and morphodynamic models) simulate how increased sea levels influence storm-driven water levels, currents, and sediment transport. This method accounts for how sea level rise affects storm surge and its interaction with barrier island features such as dunes and beaches that protect coastal communities. The findings are translated to what areas may be impacted along coasts without barrier islands.

In this study, the modeling approach was applied to simulate the effects of hurricanes Ivan and Katrina under future sea level rise scenarios on Dauphin Island, a low-lying barrier island off the Alabama coast. Results showed that sea level rise caused waves to overtop and erode dunes (overwash) at more locations and for longer durations than under present-day sea level. After landfall, surge retreats across the barrier island towards the ocean, further eroding sediment and depositing it offshore. The period of time it takes surge to retreat across the island changes under increased sea levels; longer durations of retreat cause more seaward sediment transport. This erodes the dunes and increases the volume of sand lost to the nearshore. Considering just the impact of water level during an event is insufficient to understand how a storm weakens the ability of the coastal features to offer future flood protection.

Determining how sea level rise will influence barrier islands and considering how static (bathtub) and dynamic models predict impacts differently, is important for our understanding of how to manage barrier islands. Barrier islands are not composed by hard fixed edges as they are depicted in bathtub models and are better represented by dynamic models that reflect the changing coastal conditions. This dynamic approach offers exciting potential for more detailed guidance on beach and dune nourishment strategies.

This research has been published in the Journal of Climate Change, and can be found here.