The California Current System (CCS) is a highly productive region because of wind driven upwelling which supplies nutrients to the euphotic zone. Few studies have compared upwelling and algae blooms along the entire CCS. A new study, sponsored in part by NCCOS, reviews what is known about the oceanography of the Central and Northern CCS. 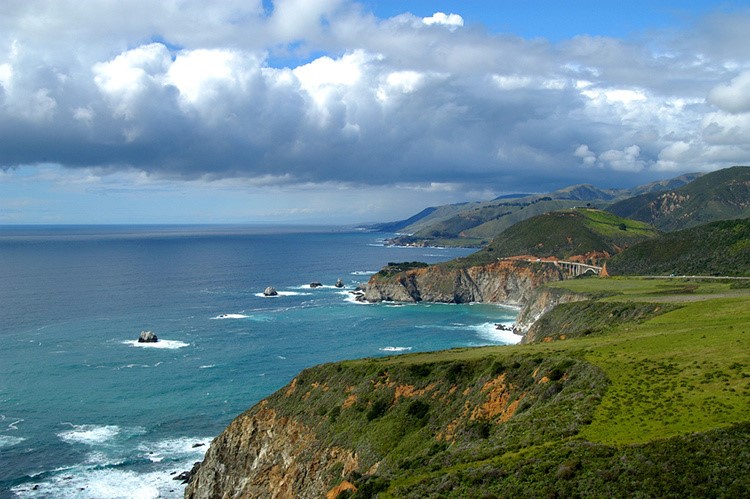 Numerous studies of the relationship between phytoplankton productivity and wind patterns in the CCS suggest that intermediate wind speed yield the most productivity on the West Coast shelf. However, few studies have considered the productivity-wind relationship across the entire CCS, including the Northern CCS (north of 42 degrees N – about the CA-OR border).

Winds and upwelling are not uniform along the north-south gradient of the CCS and, thus, latitudinal variability in phytoplankton productivity and blooms occurs. The Northern CCS experiences more downwelling while the Central CCS experiences more upwelling. Upwelling typically occurs during the summer into the fall and downwelling occurs in winter.

Despite the weak upwelling-favorable winds characteristic of the Northern CCS, it is still a productive region due to a combination of wind patterns, bottom geography, and freshwater inputs which lead to abundant nutrients in the region.

Regarding wind speed, previous studies suggest that productivity is limited when there are extremely high winds. An important earlier modeling study found that if upwelling winds are too strong, phytoplankton are swept off the shelf before they can utilize all of the upwelled nutrients. Excessive upwelling-favorable winds have a negative effect on productivity and lead to increased turbidity, increased offshore phytoplankton transport, and deep mixing. The relationship between wind speed and productivity is described as “dome-shaped” peaking at some optimal wind speed and then falling off at higher or lower wind speeds. Variable winds (i.e., wind relaxation events) prolong the time phytoplankton are on the shelf, allowing for more production. Ideal conditions for productivity would be strong upwelling-favorable winds to bring nutrients to the euphotic zone, followed by a period of wind relaxation, with timescales on the order of phytoplankton blooms.

The lack of phytoplankton productivity offshore of the shelf is attributed to both limited light and nutrient availability from deep mixing. Although subduction and advection of nutrients and phytoplankton from the coast to the open ocean reduces productivity near the coast, the offshore region is still productive, but less so.

The study recommends that future work focus on understanding the role of mesoscale retention driven by geographic features and wind intermittency, as well as the role of lateral nutrient fluxes in the Northern CCS, such as outflow from the Strait of Juan de Fuca and river discharge.

The CCS is the locus for a number of NCCOS research themes, including, harmful algal blooms, fisheries oceanography and management, oxygen loss and hypoxia, and ocean acidification.

This study was supported in part by the NCCOS MERHAB project “An Early Warning System for Pseudo-nitzschia HABs on Pacific Northwest Outer-Coast Beaches.’