A new report by NCCOS-sponsored researchers shows that consumption of lionfish from the U.S. Virgin Islands (USVI) could lead to ciguatera fish poisoning. The research team analyzed ciguatera toxin levels in lionfish collected from waters surrounding USVI and found that about 40 percent of USVI lionfish have a measurable level of ciguatera toxin. The team also found that about 12 percent of the USVI lionfish population has levels that exceed safe consumption levels provided by the U.S. Food and Drug Administration (FDA).

These prevalence rates are comparable to those in other predatory reef fish, but highlight a potential human health risk from eating lionfish harvested from the USVI. The study notes that no ciguatera fish poisonings associated with lionfish have been reported to the FDA and concludes that the potential risk for such poisoning is best mitigated by seeking advice from experienced local fishermen and local health agencies prior to harvesting lionfish for consumption. 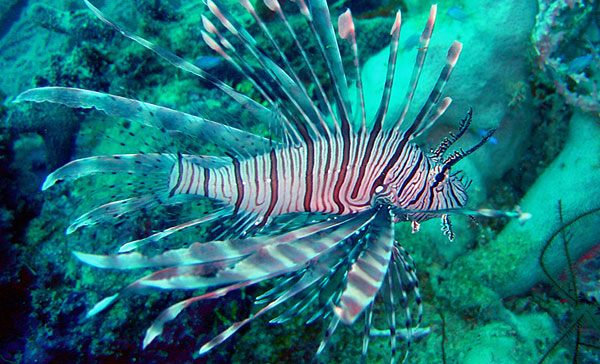 Lionfish are native to the Pacific Ocean, but have established themselves in the Atlantic and the Caribbean.

Ciguatera is a foodborne illness caused by eating certain reef fish whose flesh is contaminated with toxins originally produced by microscopic, marine protists called dinoflagellates. Lionfish are native to the Pacific Ocean, but, in less than a decade, have established themselves in the Atlantic and the Caribbean. They have no natural predators in these areas and are taking food and habitat from native fish that are important to local economies and ecosystems.

This study, funded in part by NCCOS, informed updates to the Virgin Islands Lionfish Management Plan and was published in the journal Marine Drugs.

Gulf of Mexico Algae Shield Themselves with Toxins When Hungry