The Texas Department of State Health Services is temporarily closing all of the Galveston Bay system to the harvesting of oysters, clams, and mussels because of elevated levels of an alga that can produce a toxin in some shellfish. NCCOS-funded scientists at Texas A&M University detected the harmful algal bloom and notified the state agency, which then issued a precautionary closure of shellfish harvesting in Galveston Bay and adjacent areas.

An NCCOS-sponsored research project contributed to the development and operation of an instrument on a pier at Port Aransas that provided the early warning of this potential threat to public health. The instrument, called a FlowCytobot, detected high levels of the toxic alga Dinophysis. Dinophysis can produce toxins that accumulate in shellfish, like oysters, and can cause diarrhetic shellfish poisoning in people who eat contaminated shellfish. 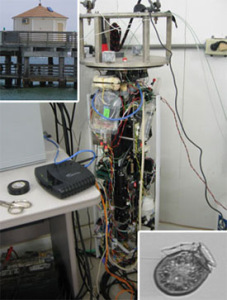 The FlowCytobot is a newly developed device that continuously collects, identifies, and counts tiny algae in the water. The device uses a laser-based system that detects algae based on their chlorophyll pigment. The instrument also takes a picture, then compares the picture to images in a harmful algae database. If a match is found and the numbers of the harmful alga exceed a threshold, a warning is sent automatically to researchers and managers. This is the seventh early warning of a harmful algal bloom (both Dinophysis and the "red tide" algaKarenia brevis) provided by the Port Aransas FlowCytobot.

NCCOS funds the development of the FlowCytobot, part of a new class of automated biological sensors poised to transform long-term monitoring, forecasting, and early warning of harmful algal blooms.