A publication sponsored in part by NCCOS presents a retrospective analysis of harmful algal bloom (HAB) related mortality events in California, Washington and Rhode Island between 2007 and 2018 involving 12 species of seabirds. The study, supported in part by NCCOS, documented the levels, ranges, and patterns of the algal toxins domoic acid and saxitoxin on digestive/regulatory organs and body fluids collected from birds during these HAB events. New information on HAB toxin levels in seabirds is provided.

Some highlights from the study:

HABs are becoming an expanding threat to marine wildlife. Over the past decade, blooms of algae that produce the neurotoxins domoic acid and saxitoxin and documented seabird mortality events have increased on both coasts of the United States. 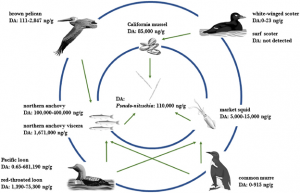 The HAB toxin domoic acid (DA), produced by the diatom Pseudo-nitzschia spp. is a neurotoxin that over-stimulates nerves causing severe neurologic damage and has historically caused substantial mortality events for marine mammals. While seabirds have been involved in mortality events where DA was implicated as the cause of death, the effects of DA on seabirds are far less widely studied than their marine mammal counterparts.

Saxitoxin (STX), produced by dinoflagellates Alexandrium spp., Gymnodinium spp. and Pyrodinium spp., is another HAB-produced neurotoxin that blocks nerve function and contributes to wildlife mortality. However, there have been relatively few documented accounts of seabird intoxication with STX in the literature.

Some of the clinical signs of DA toxicity and STX toxicity in seabirds are similar (i.e., vomiting, diarrhea and death), but the hallmark clinical signs (seizures and tremoring for DA and muscle paralysis for STX) differ. However, distinguishing between the two toxins and making a correct antemortem diagnosis based on clinical signs alone can be difficult. In addition, symptoms alone may not speak to the level of toxicity a bird may be experiencing, nor do they provide a causal mechanism.

Cloacal contents from a Pacific loon (Gavia pacifica) collected in 2017 from Ventura County, California, had the highest maximum level of DA for all samples and species tested in this study. The highest level of STX for all samples and species was detected in the bile of a northern fulmar (Fulmarus glacialis) collected in 2018 from San Luis Obispo County, California.

The authors conclude that future research to understand the pharmacology of these toxins in avian species and to establish lethal doses in various bird species would be beneficial. Expanded investigation of toxin accumulation in organs is recommended during events.

This study was supported in part by the NCCOS MERHAB project Improving Tools for Monitoring Multiple HAB Toxins at the Land-Sea Interface in Coastal California. Additional support was provided by the Central and Northern California Ocean Observing System (CeNCOOS). 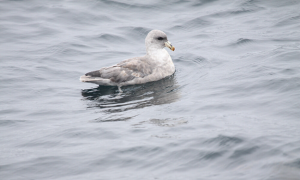 The highest level of STX for all samples and species was detected in the bile of a northern fulmar (Fulmarus glacialis) collected in 2018 from San Luis Obispo County, California. Photo credit Sophie Webb/NOAA/Point Blue 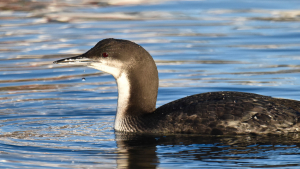 A Pacific loon (Gavia pacifica) collected in 2017 from Ventura County, California, had the highest maximum level of DA for all samples and species tested in this study. Photo credit David Beebe/National Audubon Society Photography Awards.