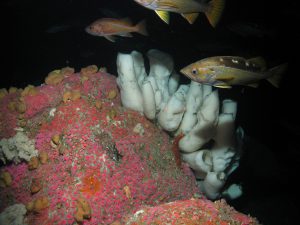 Together, the Cordell Bank (CBNMS), Greater Farallones (GFNMS), and Channel Islands National Marine Sanctuaries (CINMS) protect a combined area of more than 6,000 square miles off the California coast. Deep-sea corals and sponges in these Sanctuaries form structural habitat for many species of rockfish, including fish whose stocks are rebuilding from overfishing. Establishing a baseline understanding of species and their habitats is critical in managing new and expanded protected areas, to gauge their status and resilience to future impacts.

Our project objectives and some of our major activities and findings are listed below.

What We Are Finding

Our benthic surveys aboard RV Fulmar in 2012 used the Marine Applied Research and Exploration ROV Beagle to 400 m depth. The survey in GFNMS found high abundance of healthy corals and sponges associated with rocky habitats at Rittenburg Bank and Cochrane Bank (Etnoyer et al. 2014).  Strong associations were seen among corals, sponges, and commercial rockfish, including yelloweye rockfish, a stock which is currently listed by NOAA’s National Marine Fisheries Service as a stock in the rebuilding phase (year 14 of a 70-year plan). One new species of deep-sea coral was collected and described by California Academy Scientists, Chromoplexaura markii (Williams, 2013) 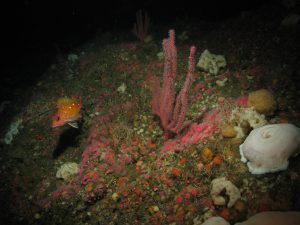 In 2014 we conducted surveys from the RV Fulmar using the sanctuary ROV in areas at the head of Bodega Canyon in CBNMS and nearby at the ‘Football’ in GFNMS, in areas that were proposed for sanctuary expansion and later included in expanded sanctuary boundaries. The CBNMS surveys found corals and sponges in mixed habitat at depths of 273–306 meters.  Sea pens, mushrooms corals, and boot sponges were the most common of these. In addition, many other invertebrates were observed including sea stars, urchins, anemones, and spot prawns. Rockfishes and flatfishes made up the majority of fish species observed. The surveys in GFNMS at the ‘Football’ found corals and sponges in mixed and hard substrate at depths of 180–280 meters.  Corals included cup corals, sea whips, and sea pens. A second new species of deep-sea coral was collected and described by California Academy Scientists, Swiftia farallonesica (Williams and Breedy, 2016).  Sea urchins were abundant, and other invertebrates included sea stars, spot prawns, and anemones. Rockfishes were the most abundant fish, followed by flatfish.  A deep-sea nursery habitat for skates and catsharks was also found during this survey, within proposed sanctuary expansion areas of GFNMS (Graiff et al. 2016).  A significant hard substrate feature consisting of sedimentary rock in a ledge formation provided habitat for many fish, corals, and other invertebrates.

Our benthic surveys in CINMS in 2014 and 2015 found Lophelia pertusa coral colonies growing in low pH environments between 50–300 m depth; we recorded pH values as low as 7.6, compared to surface values of 8.0. Live colonies were collected for laboratory experiments and water chemistry measures (pH, total alkalinity) were made using a CTD-rosette aboard the NOAA ship Bell M Shimada in 2015. The depth of the aragonite saturation horizon was found to be much shallower (about 70 m) in the CINMS compared to the North Atlantic (2,500 m or more). Lophelia in CINMS appears to persist in waters that are continuously under-saturated with respect to aragonite.

The Pacific Fishery Management Council (Council), fishermen, and several non-profit conservation organizations recognized our survey work in proposals for new fisheries openings in soft bottom areas, and new fisheries closures in rocky areas along the U.S. West Coast. Deep-sea benthic surveys conducted by NOAA and partners off the U.S. Pacific Coast were cited as an integral part of the new management measures. These decisions had the full support of the fishing community.

Key products and outcomes of this NCCOS project to date are as follows.

Data from these surveys have been used to support recent expansions for the boundaries of the Cordell Bank NMS and Greater Farallones NMS, which added protection for 2,700 square miles in 2015. In 2018, the Pacific Fishery Management Council opened new areas to bottom trawling to support fishing, and closed new areas to bottom trawling as Essential Fish Habitat, in order to protect deep-sea corals and sponges, as well as groundfish.

Our research has raised regional and international awareness about the status of deep-sea corals and their aragonite saturation state along the U.S. West Coast. Furthermore, this project contributes still images, ROV video, and water chemistry information to outreach and education programs. The project also makes these products available for additional research and analysis.

NOAA's CBNMS, GFNMS, Monterey Bay NMS (MBNMS) and NCCOS are collaborating and leveraging resources to study more seafloor habitat off north central California in August 2018. Using the NOAA ship Bell M. Shimada, we will explore newly expanded areas of the sanctuaries that have never been explored before. The team will visually and systematically survey deep-water benthic habitats, with the goal of characterizing deep-sea habitats and communities (corals, sponges, groundfishes, etc.) to inform sanctuary management of living resources.

The Team will also be collecting samples. Researchers from the University of Edinburgh in the United Kingdom are interested in obtaining new samples of Lophelia and Desmophyllum corals to support studies that correlate pH and the boron isotope to understand change over time. New water samples are also needed for carbonate chemistry, in order to correlate aragonite saturation state to coral health and condition. Coral health can be measured through areal extent, coralite size, branch length, density, and skeletal porosity, among other things.