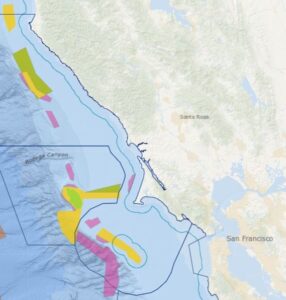 A map of new spatial management decisions off California. Seven new areas are closed to trawling, shown in pink. The closures are in areas known for "higher valued" or more sensitive habitats. The dark green areas near Point Arena and Cordell Bank are "re-openings". Both the Greater Farallones and Cordell Banks Sanctuaries ended up with larger closures than re-openings. Credit: NOAA

For the first time in recent years, the Pacific Fishery Management council is proposing new fisheries openings in soft bottom areas to be accompanied by new fisheries closures in rocky areas along the US West Coast.  Deep-sea benthic surveys conducted by NOAA and USGS partners off the US Pacific Coast since 2012 were cited as an integral part of the new management measures.  The decision was based on this and other collaborative research with full support of the fishing community.

The Council decided to close 16,000 square miles off Southern California to bottom trawling to protect deep-sea corals there, while also opening small areas of sandy bottom to trawl fishermen in Northern California.  Key outcomes for NOAA occurred in the Greater Farallones National Marine Sanctuary (GFNMS), where seven new areas were closed to bottom trawling totaling almost 178 square miles (see Figure).  Two areas were “re-opened” to fishing where there is believed to be soft, sand and mud habitat.  Proposals for these modifications cited scientific publications by several NOAA scientists. NOAA only provided the scientific data and did not make specific recommendations for these proposals.

This is a key example of science informing policy. The work used funding from Deep Sea Coral Research and Technology Program, Office of Ocean Exploration, and National Centers for Coastal Ocean Science.