To mitigate the impacts of climate change, there is a global initiative to quantify and award carbon credits for restoration and conservation of blue carbon habitats. These habitats are known to rapidly store carbon in their sediments for hundreds to thousands of years. We are quantifying carbon stock before and after a beneficial use project to evaluate the credit potential and effectiveness of thin layer sediment placement for carbon storage. 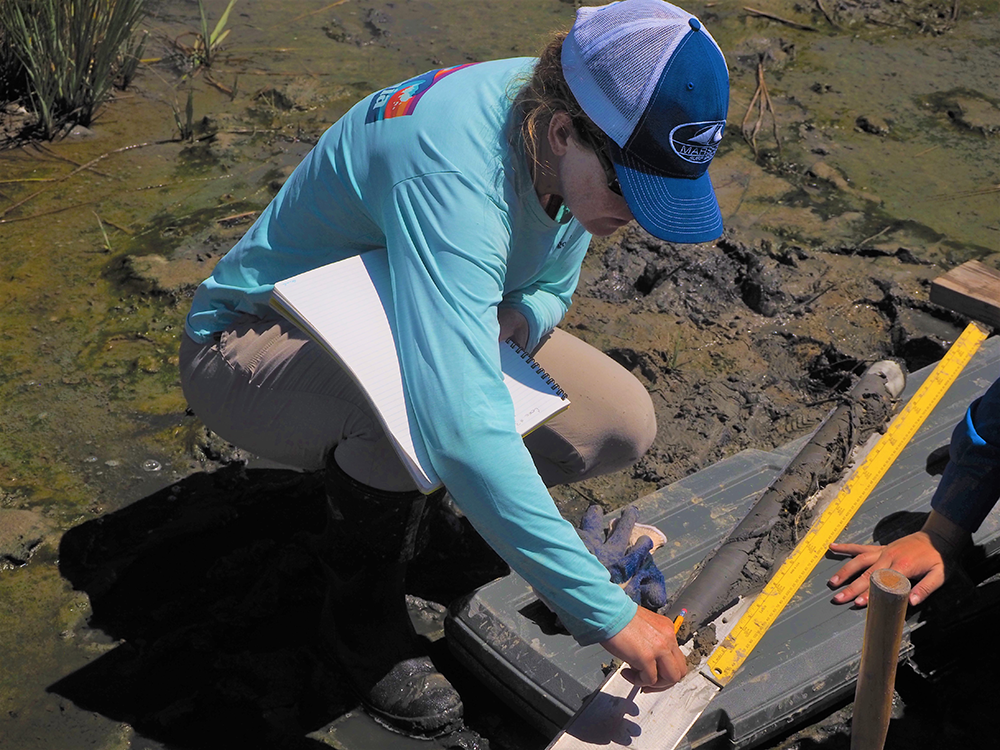 Jenny Davis (NCCOS) inspects a peat core from Swan Island (Chesapeake Bay) that will be analyzed for carbon content prior to and after dredge sediment placement, 2022. Credit: NOAA.

Why We Care
Mitigating the impacts of climate change requires both limiting greenhouse gas emissions, and understanding, protecting, and restoring natural and nature-based systems known to store carbon over long timescales.

Sediments acquired from maintenance dredging operations can be used to create and restore nearby coastal habitats — known as "beneficial use" — but it is currently unknown how such projects affect the carbon storage potential of these ecosystems. Additionally, carbon crediting is a growing market where government, non-profit, and private entities can receive financial support following a successful restoration/conservation effort to improve the carbon stock of a habitat. However, it has become increasingly difficult for projects in coastal habitats to get funded, despite explicit published protocols.

It is through these lenses that our group is tackling the questions: 1) How does beneficial use of dredged sediments impact the carbon storage of coastal habitats? and 2) Why is it so difficult for coastal projects that have followed a precise protocol to get awarded carbon credits?

What We Are Doing
In 2018, the Baltimore District of the U.S. Army Corps of Engineers placed 70,000 cubic yards of dredged material from the channel between Swan and Smith Islands in the Chesapeake Bay onto Swan Island to restore its footprint and protect the neighboring coastal communities from wind waves and erosion. Yearly monitoring efforts have been in effect since the placement and in August 2022, we took 10-cm soil samples along previously occupied transects and 1-m peatcores beneath the new and old marsh areas. Our goal is to assess the changes, if any, in carbon storage on the island since the placement.

We are also working at a site near Deal Island, Maryland, where there are plans to restore an existing salt marsh using dredged sediments. We took both 1-m and 2.5-m long cores along transects at three locations on the island where the placement is set to occur later in the fall of 2022. Our goal is to obtain a baseline of spatial and temporal carbon storage and accumulation rates since the marsh formed. Once the placement project is completed, we will continue to monitor the placement site and take future measurements of carbon content.

We will apply the Verified Carbon Standard protocol (published by Verra) to data collected by both of these coastal, beneficial use projects to investigate the challenges of receiving carbon credits.

Benefits of Our Work
The U.S. Army Corps of Engineers’ Engineering with Nature (EWN) initiative began in 2010 to develop coastal protection strategies that combined natural processes with traditional engineering approaches. The placement of dredged sediments on low-lying, vulnerable coastal habitats creates elevation that enhances the resilience of surrounding coastal communities. Our research will assess the efficacy of these projects in two different habitats through the lenses of carbon storage and carbon crediting.