Despite routine application in Asia, clay flocculation technology to control harmful algal blooms has not been adopted in the U.S., largely because of the lack of data on U.S. ecosystems and species. We will assess the effectiveness, environmental acceptability, socioeconomic costs, and scalability of modified clay dispersal as a red tide (Karenia brevis) bloom control strategy. Initial laboratory, mesocosm, and open water demonstration studies will guide larger-scale field trials.

Why We Care
Bloom control is perhaps the most challenging and controversial aspect of harmful algal bloom (HAB) management and perhaps the least developed of all areas of HAB science. Despite aggressive policies to control pests and nuisance species in agriculture, more than 20 years after an initial assessment of HAB control technologies, the situation has changed little, particularly in the U.S. Even though some bloom control technologies have been used for decades in China and Korea, this has not occurred in U.S. coastal waters subject to HABs.

Why is this? The most prominent reasons are that: 1) few technologies are scalable (i.e., they work in laboratory culture flasks or tanks, but are unfeasible, or too expensive for use at larger scales); and 2) general environmental impacts from the treatment may be viewed as more damaging than the HAB itself. It is relatively straightforward to conduct laboratory studies using cultures and small tanks (i.e., "Phase 1" studies). The challenges increase dramatically for more realistic, larger-scale "Phase 2" trials in open water. 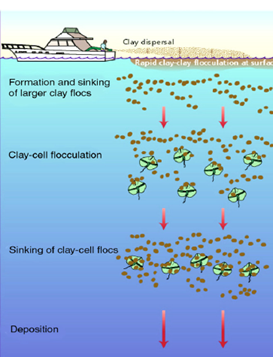 What We Are Doing
Our goal is to assess the effectiveness, environmental acceptability, costs, and scalability of modified clay dispersal as a Karenia brevis (red tide) bloom control strategy. This multi-disciplinary and multi-investigator project is testing Phase 2 of clay flocculation or dispersal of a clay solution sprayed over the water surface. This leads to aggregation (flocculation) of the clay particles and other particles, including HAB cells, which then settle to bottom sediments. This method, which uses an inexpensive and environmentally benign mineral (kaolinite) that is a common constituent of marine sediments, has been researched and used for over 20 years in China and Korea on dozens of occasions over large (~100 sq. km.) areas with no significant environmental impacts. The project’s Chinese collaborators recently modified the clay by adding an inorganic polymer (polyaluminum chloride) used routinely in drinking water purification and lake restoration, thereby reducing the amount of clay needed for a treatment 50–100 fold. This breakthrough reduces costs of application and impacts significantly, without affecting bloom control efficiency.

Project objectives are to:

The first three years will include one or two mesocosm deployments and one demonstration field treatment, the latter varying in size and complexity as allowed by the PCMHAB Programmatic Environmental Assessment. Year four will be devoted to final analyses and synthesis of project results and to outreach and technology transition. Permitted demonstration sites are located in coastal southwest Florida.

Benefits of this Project
Through repeated measurements of a range of parameters and processes in small- and large-scale field trials, the project team will obtain valuable data to evaluate the effectiveness and acceptability of clay as a control strategy for Karenia brevis and other HAB species. The project is comprehensive and "shovel ready" with a high probability of success to transition this technology to practical implementation in the U.S.

This project is supported by the NCCOS Prevention, Control, and Mitigation of HABs (PCMHAB) Program.