What Matters in a Marsh? 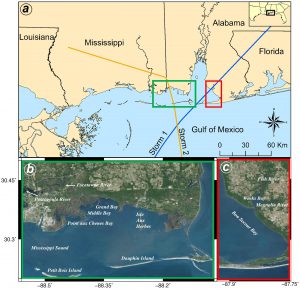 Study area and location of the Grand Bay estuary (b) and Weeks Bay estuary (c) in the NGOM as well as two synthetic storm tracks (a) used to consider storm surge and wave dissipation by the estuaries. The basemaps in this figure are screen captures of a World Imagery map in ArcGIS. Grand Bay is a marine-dominated estuary, while Weeks Bay is a mixed estuary, which experiences both marine and river influence on water level and sediment delivery. Credit: NOAA

Coastal wetlands are valuable ecosystems due to their role in coastal protection from flooding, water purification, carbon sequestration, erosion control and as a habitat and food source for many species. Estuaries in the Gulf of Mexico are microtidal, where the tidal range is less than two meters, making them more susceptible to sea level rise from drowning and a loss in marsh productivity.  Elevation is known to be an important variable, though to better understand how the dynamic coastal marsh environment responds to sea level rise, additional research is needed.

A new study clarifies this picture through assessing and comparing the dynamic response of marshes in two distinct microtidal estuaries with different characteristics, including Grand Bay, MS and Weeks Bay, AL (image to the right). Grand Bay is a marine-dominated estuary with little riverine sediment input and more uniform lowland topography, and Weeks Bay is “mixed” due to some river influence. This advances prior findings of a study of the fluvial-dominated (heavily river influenced) system in Apalachicola (FL). The collaborative work was led by researchers from Louisiana State University, the University of Central Florida, the University of South Carolina, and NOAA’s National Centers for Coastal Ocean Science (NCCOS), and was funded in part by the NCCOS Ecological Effects of Sea Level Rise (EESLR) Program.

The application of a coupled hydrodynamic-marsh model (Hydro-MEM) to assess and compare the two marshes under different sea level rise scenarios revealed the health (productivity), area, and location of remaining marsh. Multiple sea level rise scenarios were considered to cover the range of the most probable future conditions that can be used for restoration purposes by coastal managers. The results indicate that marine-dominated estuaries are at greater risk of collapse due to the low and relatively uniform platform topography and lack of sediment sources. Only at a low sea level rise scenario (8 inches by 2100) were marine-dominated and mixed microtidal estuaries found to be likely to maintain position (in this case increase in productivity) through an equilibrium between sea level rise and sediment deposition (platform accretion). At Intermediate-low sea level rise (20 inches by 2100), high productivity marsh area doubled through inland marsh area expansion for marine-dominated (Grand Bay). Under this scenario, for the mixed estuary (Weeks Bay) marsh area increased seven fold through expanding inland and maintaining much of the existing marsh. Demonstrating that even at these intermediate levels of sea level rise it will be critical to protect inland corridors that allow marsh expansion inland. The pattern was similar at higher sea level rise scenarios (47 – 78 inches by 2100), and because the marshes transition to open water, both ceased to dissipate waves or protect against storm surge.

This research helps guide future restoration projects in the Gulf of Mexico and beyond. The Hydro-MEM modeling approach used in this study was completed in partnership with local coastal managers and can be applied to other marsh systems. In particular, findings can aid coastal managers in making informed decisions on how best to protect their local ecological resources. This can include decisions for prioritizing restoration projects, protecting developed and undeveloped land, and for land acquisition planning to identify land that could be protected to allow the marsh to naturally migrate.

This work was funded in part through two EESLR awards, including one that has completed and one that is underway.  The project represents a successful partnership between academic, and NOAA Scientists.