With ocean acidification threatening the health of aquatic organisms, a study funded by NCCOS, NOAA's Ocean Acidification Program, and the National Science Foundation reviewed a variety of processes that influence acidification in estuarine waters. The study compares the drivers of acidification in three large estuaries of the North American Atlantic and Pacific coasts to illustrate how natural and anthropogenic processes (e.g., climate change) may act differently across estuaries and predict future conditions.

Oceanic uptake of carbon dioxide (CO2) from the atmosphere has altered ocean biogeochemistry and threatened the health of organisms through a process known as ocean acidification (OA). Such large-scale changes affect ecosystem functions and can have impacts on fisheries resources and economies. In many large estuaries, CO2-induced acidification is enhanced by strong horizontal stratification, long water residence times, eutrophication, and a weak acid-base buffer capacity. 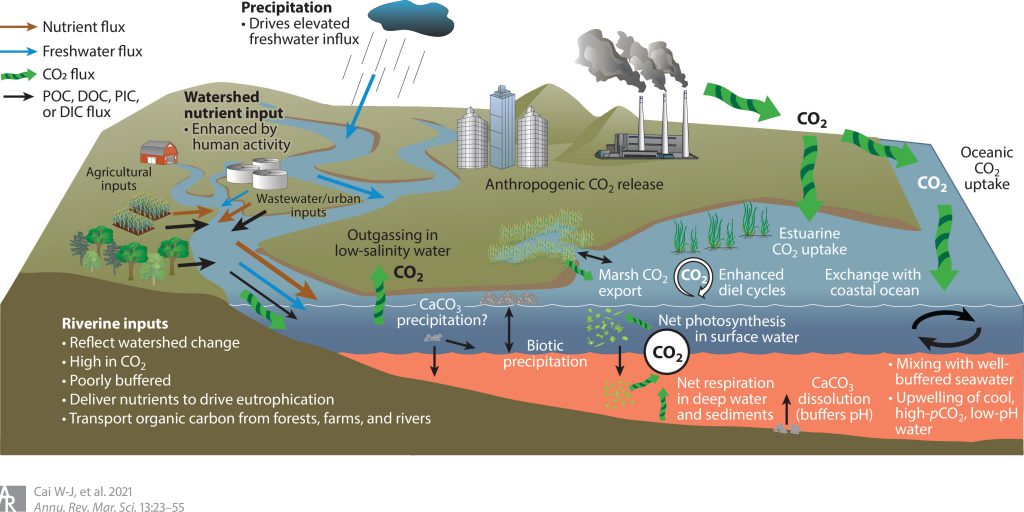 Foremost, estuaries and bays are defined by the seasonality and magnitude of freshwater inputs and the impact of freshwater on physical and chemical gradients. Rivers typically deliver more acidified water to estuaries that contain a higher carbon load than that of seawater, making estuaries vulnerable to OA. Because estuaries are often associated with population centers, fresh waters draining coastal watersheds may deliver large amounts of nutrients. Such high-nutrient inputs can lead to eutrophication and, in combination with the vertical stratification that is also driven by freshwater inputs, can cause large vertical and horizontal gradients in biogeochemical parameters such as pH, dissolved oxygen, reactive nitrogen compounds, and hydrogen sulfide. Also, in some estuaries, benthic processes, tidal wetlands, and submerged aquatic vegetation can contribute substantially to carbonate system dynamics on timescales ranging from hours to years. 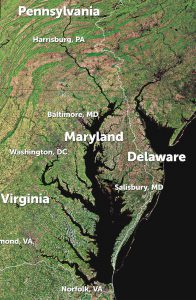 Case study examples are provided for three large estuaries (Chesapeake Bay, the Salish Sea, and Prince William Sound) to illustrate how natural and anthropogenic processes and climate change may act differently across estuaries, as well as the biological implications on various economically and ecologically important calcifying organisms.

Chesapeake Bay, located in the mid-Atlantic region of the US east coast, is an example of a large, temperate, coastal plain estuary experiencing both eutrophication and anthropogenic acidification. Its large size, diversity of habitats, and strong chemical and physical gradients make it a useful case study for the diversity of processes driving coastal carbonate chemistry under accelerating climate change. Depending on wind direction, wind-driven lateral upwelling can bring acidic bottom waters rapidly toward the eastern or western shores, creating brief (on the order of hours) acidified and hypoxic conditions.

Chesapeake Bay’s future is predicted as warmer and wetter, with high-CO2 and enhanced acidification. However, unknown future changes in river chemistry, nutrient loading rates, and biological communities may alter this pathway.

The Salish Sea is a fjord-type, semi-enclosed large estuarine system located in the Pacific Northwest. It is an example of a glacially carved inland sea that has a large cumulative freshwater input that varies spatially over the region. It represents a comprehensive system of deep basins with a strong oceanic upwelling component. Inflowing coastal waters from the Strait of Juan de Fuca flow over the sill at Admiralty Reach and mix into the deeper waters of the main basin, Hood Canal, and South Sound. 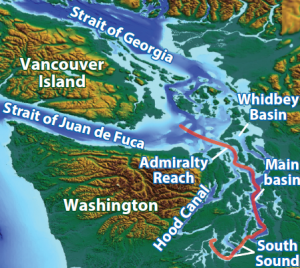 With respect to future biological exposure, the largest pH change is predicted to occur in subsurface habitats below 5 m with calcium dissolution projected to occur throughout surface and subsurface waters. Such future conditions will make physiological processes across life stages of calcifying organisms (e.g., Dungeness crab larvae) more challenging, potentially even lethal.

Prince William Sound, located along the south-central coast of Alaska, is a deep, subarctic fjord complex representative of similar regions that receive significant freshwater input. This includes large contributions of cold glacial meltwater, with seasonally modified connectivity to the open continental shelf. It has two openings to the Pacific Gulf of Alaska: Hinchinbrook Entrance and Montague Strait. A surface water flow-through circulation pattern exists with ocean shelf waters typically entering the sound through Hinchinbrook Entrance and then exiting through Montague Strait. This flow-through circulation pattern is enhanced during winter, when winds drive shoreward. 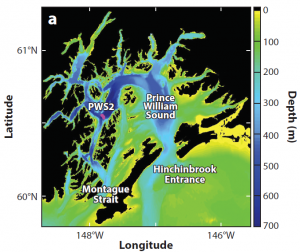 In comparison with Chesapeake Bay and the Salish Sea, future conditions in Prince William Sound may suggest a slightly more favorable habitat overall for a variety of ecologically and economically important estuarine calcifying species. However, present-day conditions in the sound might already impact some of these species, including selected crustacean, pteropod, and echinoderm species. Under projected 2050 conditions, this could lead to heightened vulnerability in some species. Pteropods, in particular, represent a substantial dietary resource for a variety of juvenile fish species in the sound. Pteropods on the North American West Coast are already displaying dissolution as shown by prior research,

This study has value for understanding management and adaptation strategies but also highlights fundamental differences in estuarine carbonate chemistry and their implications for measuring and understanding OA effects. A wider understanding and appreciation of OA in estuaries will better-inform scientists, managers and policy makers actions