A NCCOS and NOAA Ocean Acidification Program sponsored study investigated how physical properties such as winds, tides, and currents impact estuarine acidification and carbonate chemistry in the Chesapeake Bay estuary, a complex and little studied undertaking. A coupled hydrodynamic-carbonate chemistry model was used to understand the wind-driven variability in the estuarine carbonate system. Large temporal pH fluctuations and low pH events were documented that could negatively impact acidification-sensitive species such as oysters.

A major challenge in the study of estuarine acidification is the strong temporal and spatial variability of carbonate chemistry resulting from a wide array of physical forces such as winds, tides and river flows. Most studies of estuarine carbonate system dynamics have been limited to the along-channel direction, while lateral pH dynamics (e.g., channel to shore) has received less attention. 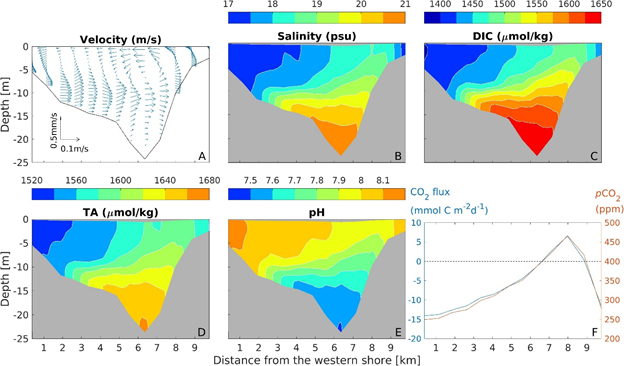 The study examined the effects of up-estuary and down-estuary winds on lateral upwelling and carbonate system variability. Detailed modeling analysis revealed that interactions between wind direction and bathymetry determined the strength of upwelling and the associated bottom-surface exchange of low-pH and high-pCO2 water.

The upwelling events have the potential to generate short-lived, but severely negative conditions for organisms residing in these otherwise favorable shallow habitats, where in extreme cases, flurries of organisms congregate near shorelines as the escape to the upwelled waters (e.g., a crab “jubilee”). Wind-driven lateral upwelling is a well-known physical phenomenon in estuaries. Along-channel winds drive cross-channel transports via lateral Ekman transport in the surface layer of estuaries, leads to upwelling or downwelling flows at side boundaries and clockwise or counter-clockwise circulations in cross-channel sections (Figure 1).

This study provides the first mechanistic explanation that wind-driven lateral upwelling can deliver acidified deep water to shallow shoals in estuaries, producing large temporal pH carbonate fluctuations. Fluctuations in pH could reach ±0.3, depending on the combined effect of wind speed and wind duration as represented by the wind impulse. Given the potential for expanded low-pH bottom waters under warming-enhanced respiration, elevated riverine inputs, and increasing atmospheric CO2, Chesapeake Bay may be more vulnerable to more frequent or intense future upwelling events. Large fractions of Chesapeake Bay oyster beds could be exposed to low pH conditions during wind events. This effect should be considered in the management of acidification-sensitive species in estuaries.

The study is part of the NCCOS and NOAA Ocean Acidification Program projects Interactions Between Ocean Acidification and Eutrophication in Estuaries: Modeling Opportunities and Limitations for Shellfish Restoration and Identifying Thresholds in Coupled Biogeochemical-Biological-Economic Systems Under Multiple Stressors. 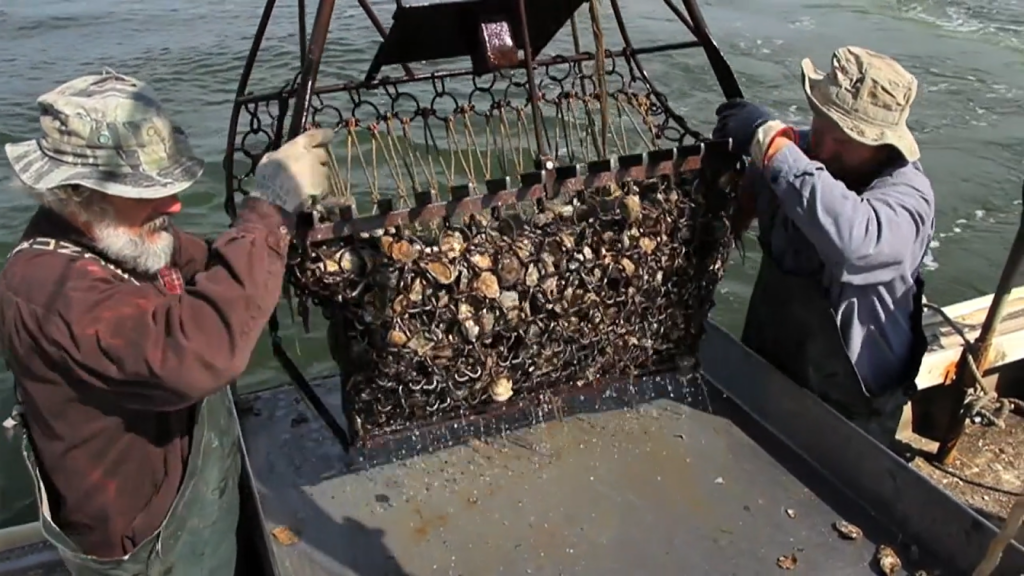