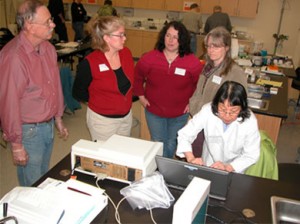 In June 2010, five Alaskans exhibited signs of paralytic shellfish poisoning (PSP) linked to eating shellfish tainted with the algal toxin, saxitoxin. Two of these people died soon after onset of PSP symptoms, and the state confirmed PSP as the cause of at least one of these fatalities. Alaska has vast shellfish resources yet currently conducts no routine screening for safety of recreationally-harvested shellfish. The Alaska Department of Environmental Conservation (ADEC) uses the mouse bioassay (MBA) for regulatory testing of commercial shellfish in Alaska. However, the reliance of ADEC on the MBA has limited the agency's ability to rapidly screen shellfish for toxins (e.g., in samples collected from the area of the reported PSP events near Haines, Alaska in 2010). Disadvantages of the MBA include the use of live animals and the difficulty of processing large numbers of samples on the same day.

Antibody-based toxin screening methods like the enzyme-linked immunosorbent assay (ELISA) have been found to be suitable for screening large numbers of shellfish and seawater samples to rapidly assess the presence of toxins. Washington State currently uses ELISA tests in conjunction with MBA testing to justify regulatory actions. NCCOS Harmful Algal Bloom Event Response Program funding was requested to help introduce rapid harmful algal bloom screening tools in Alaska. The funds helped support a training workshop on the Abraxis ELISA for PSP toxins. The workshop was held in March 2011 in Ketchikan, Alaska and was led by Kate Sullivan (University of Alaska Southeast and the Alaska Harmful Algal Bloom Monitoring Partnership) and NOAA's Northwest Fisheries Science Center and Phytoplankton Monitoring Network. Participants included researchers and regulators from the Alaska Departments of Environmental Conservation and Fish and Game; researchers and educators from the University of Alaska system; and industry representatives, including commercial shellfisheries directors, as well as shellfish farmers directly affected by harmful algal bloom events.