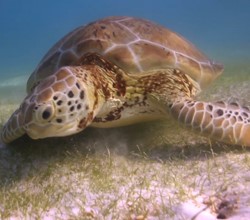 Sea turtles, such as this grazing green turtle, risk toxicity via algae toxin inhalation, ingestion, and exposure due to bioaccumulation and biomagnification. Credit: NOAA.

Karenia brevis, the Florida red tide organism, produces a suite of nerve toxins called brevetoxins. The toxins cause human respiratory illness along beaches and accumulate in shellfish, which, when consumed by humans, cause Neurotoxic Shellfish Poisoning. Severe blooms result in mass mortality of fish and a number of protected and endangered species. Among the species impacted are threatened and endangered sea turtles.

With sea turtles, brevetoxin concentrations that compromise organ physiological and immune functions are generally unknown. Due to the legal status of federally protected sea turtles, basic physiological questions cannot be addressed directly, as they require experimental investigation with controlled doses of toxins on healthy animals. The use of freshwater turtles as a surrogate physiological system allows for the determination of effects of brevetoxins on turtle physiology and immunology and helps develop effective treatment plans for sea turtles.

Led by Dr. Sarah Milton (Florida Atlantic University) and co-lead Dr. Catherine Walsh (Mote Marine Laboratory), the research project used freshwater turtles to identify how red tide toxin gets into turtles, how long it stays, and the impacts on organs such as the lungs, muscles, and nervous system. The research continued beyond 2014 with funding from the U. S. National Institutes of Health and other agencies. 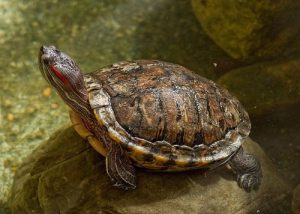 The pond slider, Trachemys scripta, can survive without oxygen for long periods, a physiological capability that also makes these animals more resistant to red tide toxins. This species is a model system for studying brevetoxin exposure and rehabilitation in sea turtles. Credit: U.S. Fish & Wildlife Service.

Read more about the project and Dr. Milton’s research in the online environmental science and conservation news and information site MONGABAY.

Publications from the project:

Oysters can handle some, but not all pollution we dump into the nation's estuaries | al.com