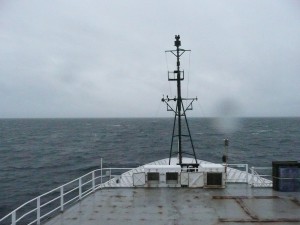 Somebody accidentally hit an alarm bell at about 5 AM, and not many on board got a lot of sleep after that.

Monday arrived bright and calm, even warm(ish) in the sun today. I think we've gotten the hang of the sampling routine, so I'm optimistic. Unfortunately, the weather is going to turn bad by Wednesday. So we're rewriting the sampling plans to accommodate both science parties. A general rule of thumb is that the cruise plan is good right up to the time you leave the dock, and this cruise is proving to be no different. According to forecasts, the weather will be better on Friday, so we're rearranging which team does what first. 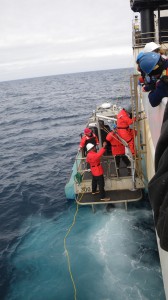 NOAA scientists descend from the Ron Brown onto the small boat, Peggy D, to test it in open ocean conditions. Credit: NOAA.

We launched the small boat (the Peggy D) today to see how difficult it would be in the open ocean, as opposed to our practice runs in the protected waters in Kodiak. Seas are running 4 -5 feet. They look much smaller from the deck of the ship. You have to time your step from the ladder to the boat just as the deck is at its peak position in the waves. My greatest fear is that somebody falls into the water, or gets pinned between the hulls of the two vessels. Hypothermia begins to set in in a matter of minutes in water this cold, and somebody in the water will be unable to help you rescue them in a very short time. The water here is about 44oF. It will get much colder, close to 32oF, or freezing, as we move north. If somebody is injured, we are a long way from help. Safety is always of paramount importance on NOAA ships.

We passed 70oN Tuesday, so we don't know how much longer we'll have Internet access. The broadband access satellites are in geosynchronous orbits at the equator. When you go far enough north, they will be too low on the horizon to be reliable. Instead, we can communicate with the outside world through radio or polar orbiting satellites, but they have a much smaller capacity than the broadband satellites. The ship has a system to compress messages coming and going. This reduces the size of the text message so we can communicate through the slower satellites.