NCCOS-funded researchers have published a paper that describes possible futures of the New England scallop fishery under a suite of climate, economic, biological, and management scenarios. The study highlights the potential impacts of carbon dioxide–driven ocean acidification, and management for a subset of future climate scenarios, including: potential ocean acidification impacts, future climate scenarios that incorporate economic development, fishery management scenarios, and future fuel costs to the fishing industry.

Under the highest carbon dioxide scenario without management intervention, sea scallop biomass might decline by more than 50 percent by the end of century, leading to subsequent declines in industry landings and revenue. Under a more moderate carbon dioxide scenario with management intervention incorporated, ocean acidification could reduce sea scallop biomass by approximately 13 percent by the end of century. Management-set catch limits improve the outcomes of the fishery under both climate scenarios. Adding a 10-percent area closure increases future biomass by more than 25 percent under the highest ocean acidification projections, but increased management does not stop the projected long-term decline of the fishery under any of the study's ocean acidification scenarios. 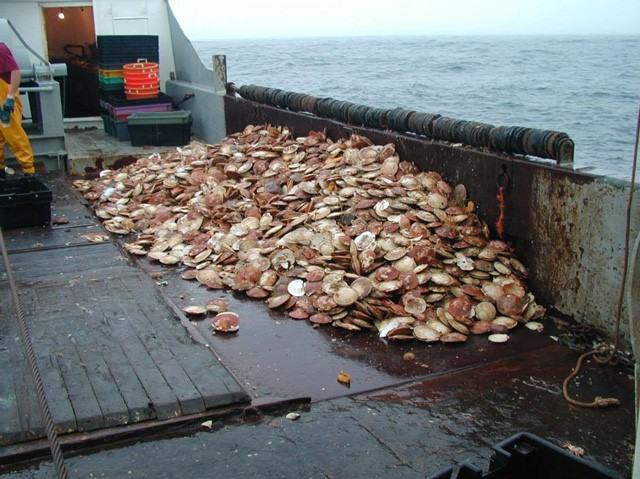 The study illustrates the potential impacts of ocean acidification under both a business-as-usual and a moderately strong climate-policy scenario. The research also illustrates the importance of having fisheries management targets to improve the long-term outcome of the scallop fishery under potential global change. A notable strength of the paper is participation by the lead stock assessment scientist and use of a population model used in the official assessment. This allows the effect of ocean acidification and management to be considered in the framework currently used to inform managers.

"NOAA in the Caribbean" Newsletter Connects Regional Stakeholders and Science