Fluorescent images of a harmful dinoflagellate before (left) and after (middle and right) exposure to the Shewanella-derived algicide. Note the impacts on the nucleus, shown in blue. The research points to the nucleus as the primary organelle targeted by the algicide, with a loss of chromosomal structure in all species; cell division is inhibited. Credit: Kaytee Pokrzywinski (University of Delaware) and Jeffrey Caplan (Delaware Biotechnology Institute). 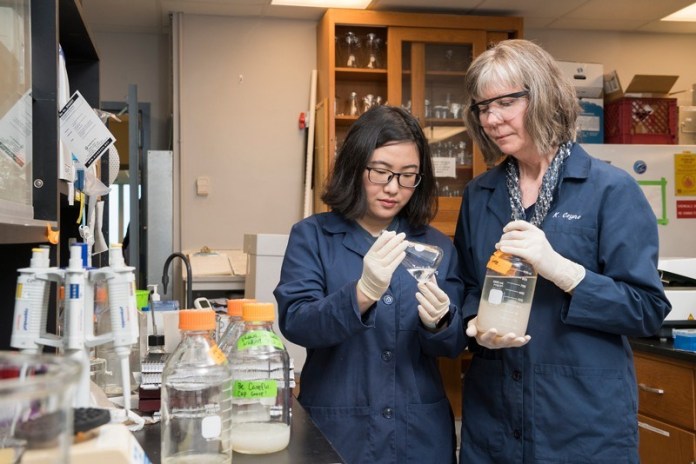 Using small-scale, natural community, microcosm experiments, the Coyne team found the naturally occurring compound induces programmed cell death in dinoflagellates, while having no negative impacts on other phytoplankton, fish, or shellfish. Results pointed to the compound as an effective and environmentally safe natural algicidal agent, but additional research was needed to determine a cost effective and efficient method to deploy it in the environment.

With Delaware Sea Grant funding, the Coyne team is now testing a promising and novel delivery method of embedding the bacteria in gel-like alginate beads. The beads are packaged in mesh bags that can be temporarily deployed in coastal waters where needed to prevent algal blooms from occurring, or to shut down or mitigate blooms already underway.