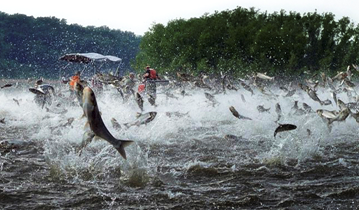 “Asian carp” are non-native fish belonging to the freshwater fish family Cyprinidae, aka the carps and minnows. The term Asian carp collectively includes four species: bighead carp, black carp, grass carp, and silver carp. These are potentially dangerous exotics that alter natural habitats to the detriment of native fish species. They are considered highly invasive throughout the Mississippi River watershed and pose a threat to the food web and fisheries of the Great Lakes. They consume plankton and vegetation important for fish and their young dependent on the lower the food chain to survive. Their negative impacts cascade through the ecosystem (USDA).

Two Asian carps, called “bigheaded” carps (BHC), i.e., Silver Carp (Hypophthalmichthys molitrix) and Bighead Carp (H. nobilis) are economically and culturally important in Asia and Europe but are considered highly invasive throughout the North American Mississippi River watershed. Of the four species of Asian carp, they especially pose a threat to the food web and fisheries of the Great Lakes. 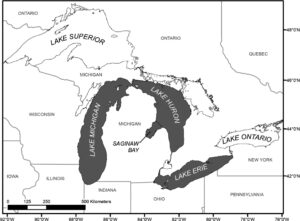 Lake Michigan and Huron
In the oligotrophic (sparsely enriched) main basins of Lakes Michigan and Huron, the projected BHC population growth was low or negative, with a projected final BHC biomass of 0.5-1.1 times the estimated initial introductory biomass (2% of total fish biomass for each BHC species). BHCs had negligible effects on most food web groups across all model scenarios.

Lake Erie and Saginaw Bay
In contrast, in the mesotrophic (moderately enriched) waters of Saginaw Bay and Lake Erie, the projected BHC biomass was 2.5-12.5 times higher than the initial biomass across all scenarios, and the largest increases occurred under scenarios of high prey vulnerability to BHCs and high BHC production rates. High projected BHC biomass in Saginaw Bay and Lake Erie had negative effects on zooplankton and plankton-eating fish groups and mixed effects on fish eating groups (piscivores). However, BHCs had relatively negligible effects on most other food web groups across all model scenarios.

The study results for the four habitats are consistent with reported BHC effects on food webs in the Mississippi River and its tributaries.

These findings are of importance to the Invasive Carp Regional Coordinating Committee that promotes collective efforts of international, federal, state and municipal agencies to combat the spread of Asian carp into the Great Lakes.

This study was supported in part by the NCCOS Regional Ecosystem Program project “Forecasting the Spread and Bioeconomic Impacts of Invasive Species in the Great Lakes.”