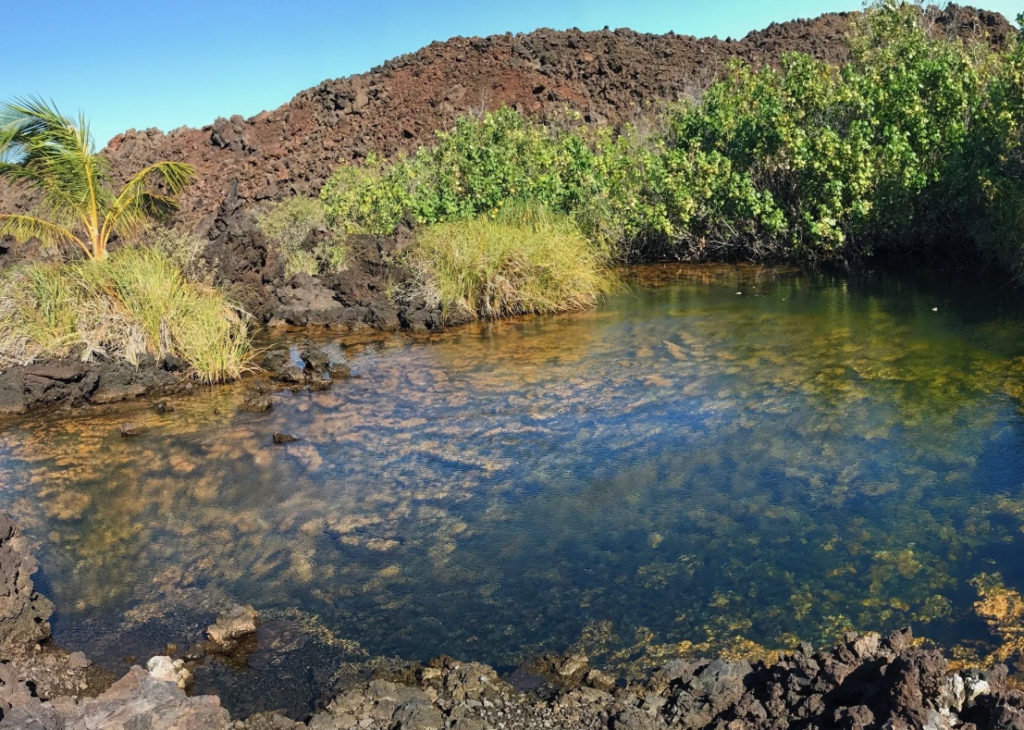 An anchialine pool on the west coast of the island of Hawaii. Credit TNC.

The west coast of the island of Hawaii has several anchialine pools—inland fish ponds with underground connections to the ocean—that support endangered and indigenous plants and animals. Sea level rise and land development are threatening the wildlife in these pools, including shrimp that are a culturally important bait for native Hawaiians. NCCOS-funded researchers, led by The Nature Conservancy (TNC), have developed a sea level rise projection app for coastal managers to visualize the impacts of rising sea levels and future development on the pools and to prioritize restoration and conservation of the pools over time. 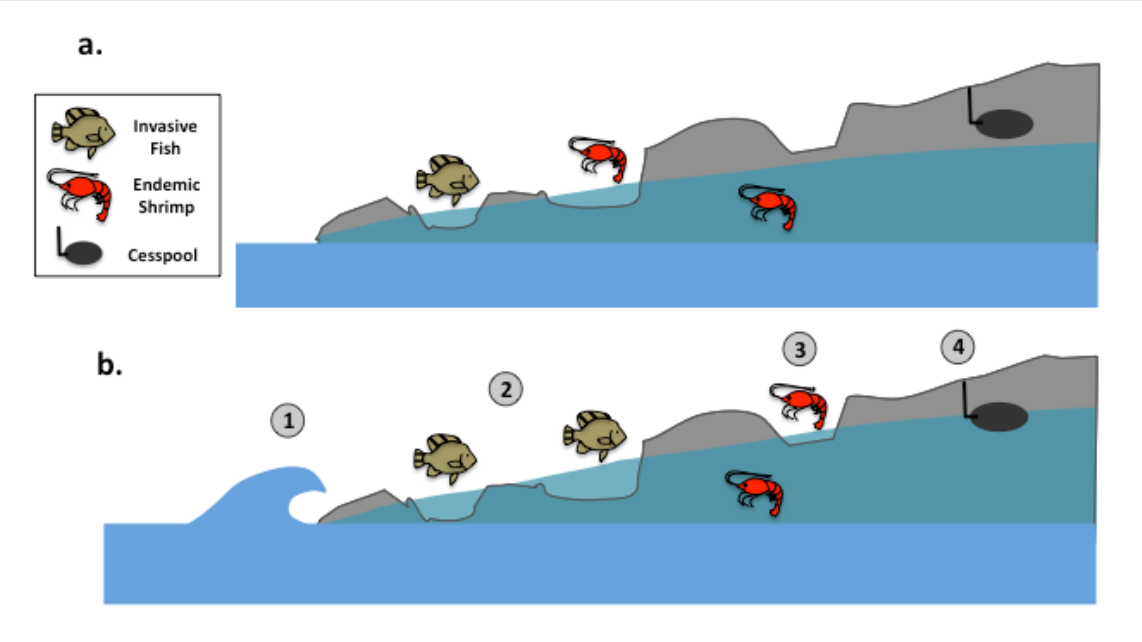 Diagram illustrating (a) current conditions and (b) future risks to anchialine pools due to sea level rise: (1) Pools may become connected to the ocean at higher sea levels, (2) Invasive fishes may disperse during high water levels, and (4) Groundwater may inundate cesspools. However, (3) new pools will emerge in low-lying areas as daily groundwater floods previously dry areas. Credit TNC.

The TNC models used to create the online app incorporate flood frequency, magnitude, as well as both ocean and groundwater elevations to predict when and where pool habitats will shift. The models show how risks of invasive fish introduction, septic tank/cesspool contamination, and changing development pressures that might alter pool habitats from now until year 2080.

Anchialine pools form in natural depressions in the lava and have a subterranean connection to the nearby ocean. As sea levels rise, groundwater is also pushed upwards, creating new anchialine pools at higher elevations and submerging lower pools during storm surge events or high tides. When these habitats are submerged, invasive fishes are introduced to the pools, while septic tank and cesspool contaminants also enter.

The tool is already being used to make coastal management decisions and to plan for the future. For example, a local community non-profit at Kiholo Bay (North Kona) is using the app to identify adaptation measures for private landowners and restoration priorities for anchialine pool management within their Board of Trustees and staff meetings, and the County of Hawaii is incorporating the insights from the maps into their update of the Hawaii County General Plan.

South Kohala Regional Management plans have also incorporated the study findings for prioritizing land suitable for conservation to enable landward migration of pools and specific pools that are compatible for restoration via invasive species removal. The tool informed the first restoration of an anchialine pool since 1990, and due to its utility the project is being expanded to cover the remainder of the big island of Hawai’i.

The models and online story map tool are products of the NCCOS Ecological Effects of Sea Level Rise project Sea-Level Rise Modeling as a Catalyst for Effective Ecological Management in West Hawaii.

The project is led by The Nature Conservancy (TNC) in Hawaii.