NOAA and its research partners predict that western Lake Erie will experience a harmful algal bloom (HAB) of cyanobacteria this summer that is smaller than in 2017, but larger than the mild bloom in 2016.

Scientists expect this year’s bloom to measure 6 on the severity index, but could range between 5 and 7.5. The severity index is based on a bloom’s biomass—the amount of its harmful algae—over a sustained period. The largest blooms, 2011 and 2015, were 10 and 10.5, respectively. Last year’s bloom had a severity of 8. However, the size of a bloom is not necessarily an indication of how toxic it is. The toxins in a large bloom may not be as concentrated as in a smaller bloom. NOAA is developing tools to predict how toxic blooms will be. 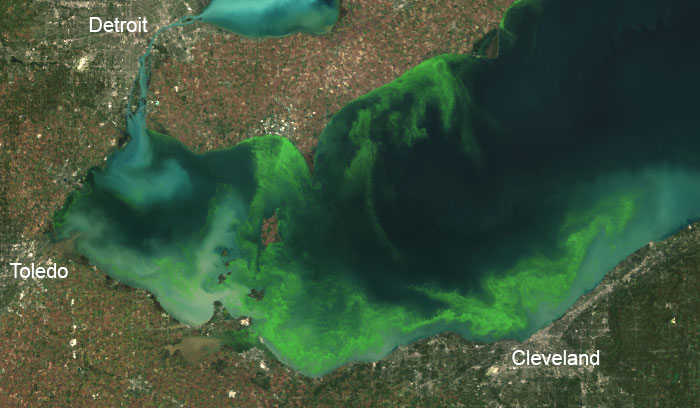 This year's forecast and bulletins will use satellite data from the Sentinel-3a, providing detail of features 10 times smaller than previous forecasts, which are used by water treatment plants and public safety managers to make decisions about access to beaches and water supplies, and determine the best places for the public to enjoy the lake. The Lake Erie forecast is part of a NOAA ecological forecasting initiative that aims to deliver accurate, relevant, timely, and reliable ecological forecasts directly to coastal resource managers and the public. In addition to the seasonal forecast, NOAA also issues HAB bulletins twice a week during the bloom season, which provide a three- to five-day forecast.