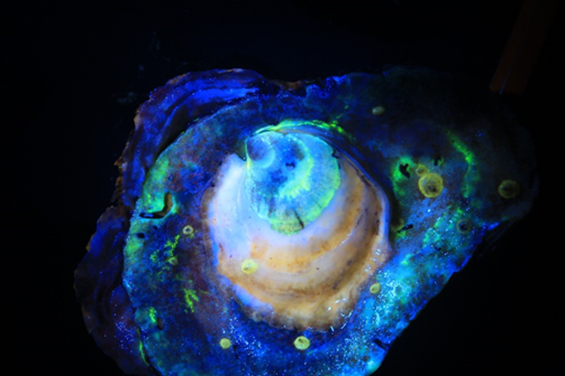 Traditional oyster restoration strategies involve seeding oyster shells with lab-harvested oyster larvae in enclosed tanks before returning the seeded shells to their natural habitat. A research team led by NCCOS has been studying the feasibility of releasing oyster larvae directly onto open water oyster reefs as an alternative to the current restoration process. 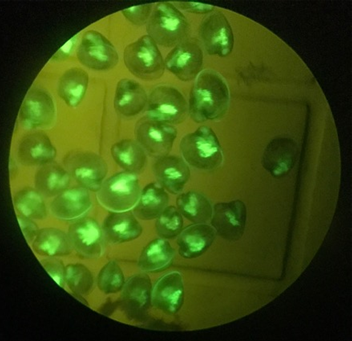 One challenge of this new method is determining whether the spat (juvenile oysters) settling on the open water reef are actually the result of the released larvae, or if they are from naturally occurring larvae in the water column. NCCOS scientist Jason Spires recently developed a mechanism to mark late stage oyster larvae by placing them in a calcein (fluorescent dye) bath prior to release. The dye, an Investigational New Animal Drug (INAD) in the Aquatic Animal Drug Approval Partnership (AADAP) program, acts as a tag once laid down in the oyster shell. This calcein dye “tag” will glow under special light, and can persist for several months as the larvae settles and grows into a juvenile oyster.

Not only will this technology support oyster restoration strategies, but it also has implications for oyster poachers. Tagging of the shell will allow aquaculturists, health officials, and enforcement agencies the ability to positively re-identify marked oysters.

To test the calcein dye technique, NCCOS scientists deployed three sets of 32 shell bags in mid-July 2019 onto a Chesapeake Bay oyster sanctuary adjacent to Cooperative Oxford Laboratory, in Oxford, Maryland. Divers released calcein-tagged oyster larvae onto all three shell bag reefs. The shell bags were recovered a week later and moved ashore to flow-through holding tanks so any spat could be counted and checked for a calcein tag.

Did the research team find any marked spat? Yes! Continued analysis is under way, but early estimates show that the experiment produced thousands of oyster spat. All spat sampled showed calcein marks. 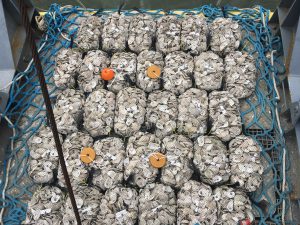 Shell bags near the center of each oyster reef, where the larvae were deployed, produced far more spat than bags further from the center. A replicate experiment is currently under way, with early results being even more encouraging than the July deployment. Although settlement results are promising, additional studies are warranted to investigate the scalability and applicability for large scale oyster restoration and aquaculture.

This project is in support of a request from the NOAA Restoration Center to investigate alternative oyster restoration strategies. Tagging methods utilized for larval origin confirmation build on methods developed in the NCCOS funded Oyster Marking Methodology Study.