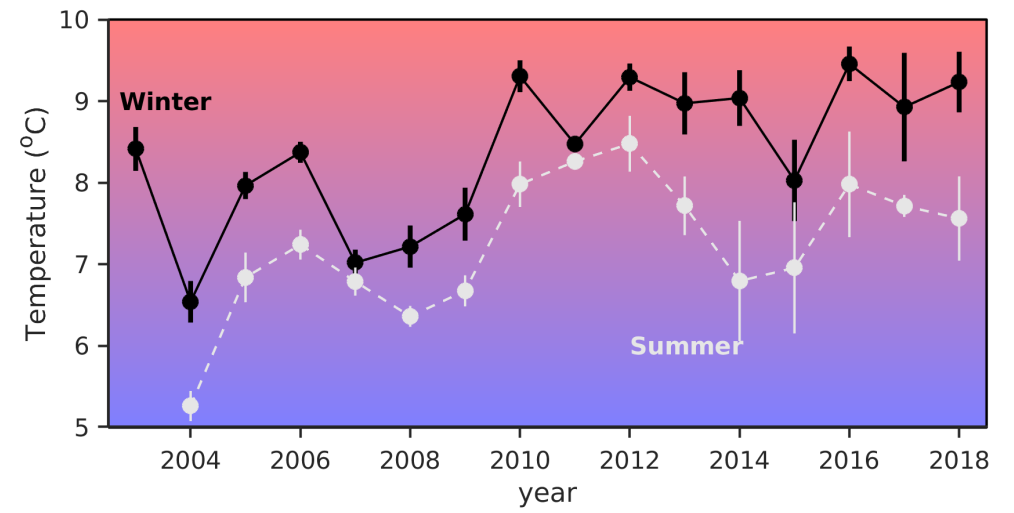 Interannual variations of winter and summer temperature in the Jordan Basin (location as shown in upper panel) at 150-m water depth. The vertical bars represent one standard deviation over the three months period, June-August for summer, and December-February for winter. This figure shows the bottom water is persistently warmer in winter rather than in summer.

Nutrient-rich slope water inputs to the Gulf of Maine provide 30% of the nutrients needed to support the high biological productivity of the gulf. As such, understanding the dynamics of open ocean influences on the gulf is of significant ecological importance. In a new study published in the Journal of Geophysical Research-Oceans, scientists investigate the physical connectivity between Gulf of Maine bottom water and adjacent open ocean in the Atlantic.

Previous studies suggest that bottom temperature may be a good indicator of nutrient dynamics in the Gulf of Maine. NCCOS scientists and academic partners from Woods Hole Oceanographic Institution examined long-term continuous monitoring data and found that the deep water temperature in the Gulf of Maine is persistently warmer in winter and colder in the summer. This unique seasonality differs dramatically from the deep water on the neighboring continental shelves, and represents a delayed response of the deep water in the gulf to seasonal changes of the major currents in the adjacent open ocean by approximately three months.

This study provides a clear demonstration of the influence of open ocean processes on a coastal system. Findings indicate that the Gulf Stream activities affect the source properties of the intruding slope water into the Gulf of Maine, and intermittent Gulf Stream warm-core rings in the region can drastically increase the temperature and salinity of the intruding slope water. Meanwhile, the inflow from the upstream Scotian Shelf into the Gulf of Maine tends to suppress vertical mixing in the gulf and helps maintain the heat and salt stored in the deep gulf.

In the spring and summer, harmful algal blooms (HABs) in the Gulf of Maine are fueled by the input of nutrient-rich slope waters. These findings suggest that inflow from the shelf and slope seas may be used as a precursor of ecosystem changes in the Gulf of Maine, which has implications on early warning and improved forecasts of anomalous ecological conditions, such as HABs.